Most Aggies believe the student Muster on campus calls the names of all Aggies who have passed away in the previous year.

But records indicate that historically, this has not been the case.

Rather, the student Muster is like hundreds of other Musters — a local gathering that calls a short list of names from its own community.

Aggies had been gathering on April 21 for decades, mostly reunions and parties that former students held in towns around Texas and the U.S. But things changed considerably in 1942 when national headlines told of Aggie soldiers meeting for San Jacinto Day while under attack on a Pacific island.

That Corregidor story inspired more than 500 April 21 gatherings in 1943 — the first time the events were called “Muster.”

The next year saw more than 600 Musters, including the first one organized on campus.

In 1945 and ’46, the names called on campus were also mainly former students killed in World War II.

Some former student names were called at the 1951 Muster held at the dedication of the newly built Memorial Student Center; records do not make it clear whether any of these were from the Korean War (1950-’53). But starting in at least 1955, the student Muster roll was explicitly limited to “students who have died during the past year.” For each name, a single best friend answered “Here.” These Musters were held mostly on the MSC lawn.

U.S. combat troops entered Vietnam in 1965, and from April 1966 onward, the student Muster began calling former students killed in Vietnam along with the names of current students who died during the year.

These student Musters were held mainly on the MSC lawn or the lawn of the Systems Administration Building, sometimes moving into G. Rollie White Coliseum.

The Brazos County A&M Club had typically held a separate local Muster since the 1940s. But by at least 1969, this event had merged with the students’ Muster. Over the next four decades, through 2011, these two Musters were held together, with two lists read: the students’ roll and the Brazos roll.

The roll in 1971 included “students, Brazos County former students and military personnel”; the 1972 speaker was a decorated Vietnam veteran, Larry B. Kirk ’66.

In 1977, a total of 274 names were on a list of all known Aggies who had passed away in the previous year; this list was sent to all local Musters with the instruction: “Call the names of those from your area.” The names called at the campus Muster were “students and members of the Brazos County A&M Club who have died since the last Muster.”

During the 1970s, the number of names called on campus was usually between 40 and 60.

News accounts from 1987 and 1989 indicate that “names by special request” were called at the campus Muster, in addition to current students and Brazos County former students.

The 50-Year Reunion Classes had been hosted at the student Muster as far back as 1945, when cadets welcomed the Class of 1895. For 1986, records indicate the Muster roll included the Class of 1936.

1980 was the first year that the campus Muster used candles, a tradition that had started at off-campus Musters (Jack Fritts ’53 instituted it in Lubbock in the 1960s and brought it to the Austin Muster; it spread from there). Student Muster Committee notes say they hadn’t budgeted for candles, but a former student from Houston stepped in and provided them.

The Persian Gulf War began in August 1990, and the April 1991 campus Muster called the names of three former students killed in combat.

Crowds had grown so large that in 1993, some 1,500 seeking to attend Muster in G. Rollie were turned away; the next year, Rudder Auditorium was used as an overflow location.

Reed Arena opened in 1998, and the first event it hosted was Muster.

During the 2000s, the number of names called in Reed Arena typically was between 130 and 181, including some military deaths: former students killed in Iraq and Afghanistan.

In 2008, the student Muster Committee and the Brazos County A&M Club began discussing whether to split the two events again.

As in recent decades, the student Muster typically calls students; students’ immediate family; active military former students; current and recent faculty and staff; and members of the 50 Year Reunion Class. Please see tx.ag/Criteria for exact wording and further information. The number of names called at the student Muster was 125 in 2018 and 136 in 2019.

This list is supplied to local Musters, but each Muster exercises its own discretion over which names to call. Learn more at tx.ag/AddAName and tx.ag/WhichMuster.

In 2018, The Association instituted a new annual practice to eliminate the chance that any Aggie’s name might be missed: the Live Worldwide Roll Call, in which typically more than 1,600 names are read aloud over the course of several hours, and each is answered with “Here.”

Amid the beginning of the global coronavirus pandemic, Muster leaders on all levels spent March and April 2020 revising plans to uphold tradition and honor the fallen while keeping Aggies safe. The Association led a coordinated effort with A&M, the student Muster Committee and former student Muster chairs to create Muster Live, a new website that could house virtual Muster ceremonies. Hundreds of local Muster organizers postponed or canceled plans; at least 43 also put together virtual ceremonies. On April 21, MusterLive.AggieNetwork.com went live, and some 47,000 Aggies, family and friends visited the site throughout the day to post "Here," upload photos and watch events: 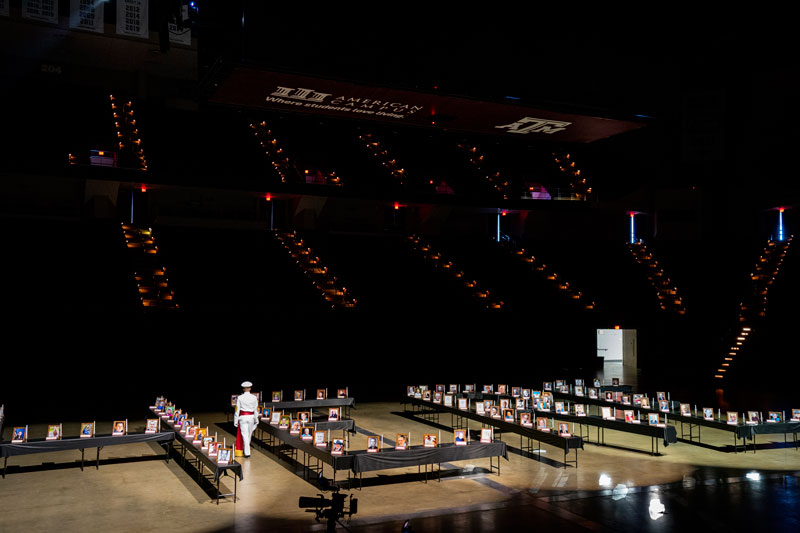 2020's virtual campus Muster in Reed Arena had no guests or attendees, only those conducting the ceremony (photo by Sam Craft/Texas A&M Marketing and Communications). For 2021, with Reed Arena's ceremony limited mainly to families and guests, a similar arrangement spelling "HERE" was set up on Kyle Field.

In 2021, MusterLive.AggieNetwork.com again hosted streams of the campus Muster (106 names) and Worldwide Roll Call (1,401 names); there were 12,396 unique visitors to the site from 19 countries, with 2,229 posts of "Here" made for individual Aggies.

For 2021's campus Muster, A&M's student Muster committee came up with a historic dual-venue solution using Kyle Field and Reed Arena to include as many Aggies as possible while keeping safety prioritized: The ceremony was held in Reed with only family members and limited guests present, livestreamed to the website and to video screens in Kyle, which was opened to the public. An estimated crowd of 7,000 attendees filed into Kyle Field, spreading out across most of the east-side first deck, and watched the ceremony unfold via video. On the football field, tables bearing candles were set up in the shape of the word "HERE," similar to an arrangement from the previous year's virtual Muster in Reed. As the campus roll call began in Reed, four Ross Volunteers came onto the field and lit candles for each name, one by one.

In 2022, the Worldwide Roll Call included 1,394 names; the campus Muster returned to Reed Arena at full capacity and called 116 names; and around the globe, more than 260 local Musters were held. The Muster Live website had 5,797 unique visitors from 10 countries, with 967 individual posts of "Here."

The Association of Former Students has a bold vision to engage 100,000 donors annually for Texas A&M by the end of 2020. To learn more, visit tx.ag/100Kby2020. To help us help more Aggies and provide more support to Musters worldwide, make a gift at tx.ag/give.