Part of a yearlong series in 2019 celebrating the 140th anniversary of The Association of Former Students. More in the series:
How did Texas A&M settle on the term “former students”?
Since 1951, Association support for the MSC has never flagged
Curved, neoclassical Alumni Center reflects strength, tradition
Why is the Aggie Ring tradition so strong?

Aggie Muster took place for decades before it was even called Muster.

April 21, San Jacinto Day, has been special to Aggies since the 1870s, when it was celebrated by the cadets; it became a campus holiday in the 1890s, and in the 1900s-1910s, former students began using the day as a time to gather together off-campus. This reportedly included April 21st gatherings during World War I by former students stationed in Europe.

During the 1920s and 1930s, The Association of Former Students used its Texas Aggie publication to encourage Aggies everywhere to meet up for “Apr. 21 Parties” and “San Jacinto Day Meetings.” 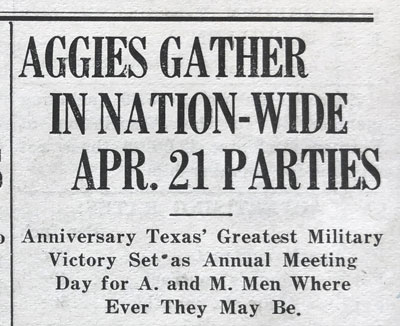 The Texas Aggie’s April 15, 1923, edition included the famous call, “If there is an A&M man in one hundred miles of you, you are expected to get together, eat a little, sup a little and live over the days you spent at the A&M College of Texas.” 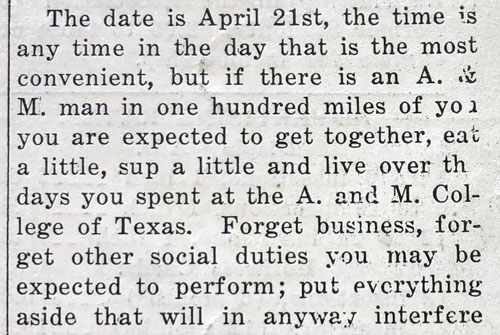 These efforts were so successful that during most of the 1930s, it was former students off-campus who mainly held the April 21 get-togethers. In 1934, the Chicago A&M Club reported, “70 per cent of all the A. and M. men in Illinois, Indiana and Wisconsin were present” at their gathering.

Much of this was the direct effort of Association head E.E. McQuillen, Class of 1920. He led The Association from 1926 to 1947, and kept in personal contact with great numbers of Aggies. He encouraged the formation of more A&M Clubs in the 1920s and later introduced the principle that The Association would charge no dues, but instead count all Aggies as members.

Then came the events of World War II. A nation hungry for good news fastened on a story of Texas Aggies under siege in 1942 on the Pacific island of Corregidor. The Aggie general in command of Manila Bay had a list made of the A&M men on Corregidor. A romanticized version of the story said they gathered together and “sang Texas songs,” though historians agree they could not have physically gathered together under the heavy bombardment.

But the story gave international fame to the Texas Aggies’ April 21 gathering.

The following April, McQuillen called on all Aggies to “Muster” on San Jacinto Day. He created the first “Muster packets” (with guidelines and suggested events), which The Association still sends today to Muster chairs. In these packets, he called on Muster chairmen to gather Aggies together, to read some inspirational words, to have every Aggie present introduce himself in “the traditional roll call” – “stand, give name, class, rank (if in service), home town (if in service)” – and other suggestions.

Also in this 1943 packet, McQuillen created a new practice of answering “Here” as the names of the Corregidor Aggies were called.

“In the first year of this custom,” he wrote, "you should explain the procedure in advance. As the name of each man present at the famous Corregidor meeting is called, a close friend, classmate or any Aggie present should stand, answer ‘Here!’ and remain standing at attention until this tribute is completed.”

McQuillen suggested they first read a poem honoring the Corregidor heroes that is still read at Musters today, and then call the Corregidor Aggies’ names “quietly – firmly – just loud enough to be heard.” He suggested a closing formula also still used today, with the words: “The Muster is dismissed until April 21, 1944.”

These efforts worked. There were more than 500 Musters in 1943, with an estimated 10,000 Aggies in attendance.

The following year, 1944, saw over 600 Musters with 12,000 Aggies. That year was also the first student Muster on campus; McQuillen was the first campus Muster speaker, and the cadets called 12 names of Aggies killed in the war.

Today, there are more than 300 Musters worldwide each year. The Association sends Muster packets to chairs and provides step-by-step planning support; it mails thousands of Muster invitations and maintains an online bureau of Muster speakers. The Association’s records and web staff members also maintain the online Worldwide Roll, updated daily, and provide those names to local Musters.

And in 2018, The Association instituted a new annual practice to eliminate the chance that any Aggie’s name might be missed: the Live Worldwide Roll Call, in which more than 1,600 names are read aloud and each answered with “Here.”

All of The Association’s Muster efforts are possible because of donations every year from thousands of Aggies. Add your support: tx.ag/give.