How Did A&M Settle On “Former Students”? 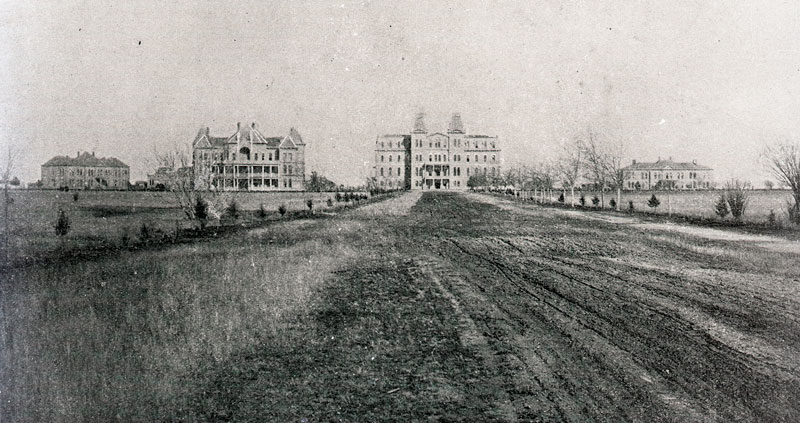 Texas A&M was still rising out of the prairie in 1894, and The Association of Former Students was already 15 years old.

In this campus view from around 1894, only four long-vanished buildings appear: Austin Hall, Ross Hall, the Main Building – called “Old Main,” later replaced by the Academic Building – and Pfeuffer Hall.

The Association grew from three organizations born in these early decades, as chronicled in “We Are The Aggies” by John A. Adams, Jr. ’73.

Adams writes that these groups laid the foundations for several important functions of today's Association: Aggie Muster, the Directory of Former Students, the Class Agents and the beginnings of the A&M Clubs network.

Those early A&M alumni groups had differing views on an important question, though: Would all former students be accepted, or only graduates? (The definition of "alumni" includes both.)

Organized in 1879, the Ex-Cadets Association met at A&M during graduation week in June 1880, ’81, ’82 and ’83. They began efforts to gather a listing of all former students, graduates or not.

As Texas A&M fought for state funding in the 1880s and the Ex-Cadets group became inactive, a new organization was created in the belief that graduates would be A&M’s best and strongest advocates.

This was the Alumni Association, formed in 1888.

The Alumni Association started a job placement bureau and began a practice of concluding its annual June meetings with a roll call honoring members who had died during the past year. They also introduced, in 1893, the concept of Class Agents; this later became a core feature of The Association.

But this group’s exclusivity didn’t sit well with everyone.

That year, a new group called Alpha Phi extended membership to everyone who’d completed at least a term at A&M. They published a directory and put energy into finding former students jobs and organizing local “chapters,” forerunners of today’s A&M Clubs that are still chartered by The Association.

The two groups merged in 1900, and with the acceptance of all Alpha Phi members into the Alumni Association, the idea of excluding non-graduates fell by the wayside.

The “Association of Former Students" name was formally adopted in 1919.

Because of this history, Aggies and The Association proudly emphasize the term “former student” and its inclusivity.

However, the term “alumnus” has the same meaning (a person who attended a school, not necessarily a graduate), and it survives in some official Association uses, particularly where a short description is desirable.

Today, The Association has more than 200 A&M Clubs across the globe, the former student directory is searchable online for free, and Class Agents serve Aggies from every year with Class Reunions, newsletters and social media connections.

Former students also continue advocating for A&M in the halls of government through the Texas A&M Advocacy Network, led by The Association. Join them Feb. 5 in the Texas Capitol for OMLD 2019!

All Aggies are lifelong members of The Association; there are no dues. Free services including the online directory, Club and Class news and Muster invitations are provided because of donations averaging less than $200 apiece from around 50,000 active members each year. You can make your membership active at any time by visiting tx.ag/give.