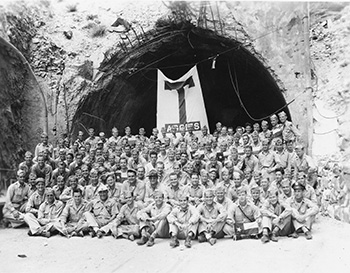 It was April 1942, and World War II had the nation in a chokehold. In the fight against Japan, the small island of Corregidor in Manila Bay was the last of America’s strongholds in the area. As the small island continued to be pummeled by artillery shells from Japanese planes, the only safe spot for American soldiers was the bombproof Malinta Tunnel. The 830-foot by 35-foot passageway—used as headquarters, a supply depot and makeshift hospital—became the spot of Aggie legend.

It was April 21,—San Jacinto Day, Brig. Gen. George F. Moore, Class of 1908, realized. According to the book
Softly Call the Muster by John A. Adams, Jr. ’73, Moore asked another Aggie, Maj. Tom Dooley ’35, if they
could get a list of the Aggies fighting at Corregidor. There were 24 of them.

“So, we had a roll call, and a muster is a roll call,” Dooley was quoted as saying. He sent word to one of the
news correspondents reporting from the island, and the reporter wired the story back to the states.

Sometimes in tradition, truth and legend land so close together, a historian can get whiplash. And somewhere along the newswire, the tale of Aggie Muster at Corregidor grew wings, said retired University Archivist David Chapman ’67. The Houston Post ran the headline, “Aggies Fete San Jacinto—35 Texans Bear Down on Famed Fight Song.” The story said the group gathered in the tunnel and “sang Texas songs.”

Impossible, said Chapman. The story is debunked by other accounts, too. It was war, Chapman said. Artillery
shells rained from the sky; there was no way the Aggies would have physically gathered together, he said.

But as a historian, Chapman calls no foul. The story, he explained, gave hope to a nation and helped cement
the genuine celebration Muster triggers now. It gave Muster an international standing. This year there will be
more than 325 Musters held around the world, but it was that 1942 Muster that provided the inspiration for what Muster has become.

One of the most famous photos in all of Aggie lore is the one of soldiers gathered at the mouth of Malinta Tunnel, an Aggie flag—hastily made from a bedsheet—flying proudly above their heads. That flag and a copy of the photo are displayed seasonally on the mezzanine of the Clayton W. Williams, Jr. Alumni Center. Many believe the photo shows the 1942 Corregidor Muster, but it actually depicts a second Corregidor Muster, in 1946, when Aggies returned to honor the men of ’42.

Texas A&M has already begun planning for a special event in 2017 to recognize the 75th anniversary of the
first Corregidor Muster. Events will include the unveiling of a monument at the mouth of Malinta Tunnel, recognizing and remembering the 24 brave Aggies who Mustered there in 1942.


comments powered by Disqus
What Others Are Reading: