Quietly, steadily, for 140 years, The Association of Former Students has been building a network that helps and serves hundreds of thousands of Texas Aggies.

Today, Aggies who travel or move anywhere in the world can find an A&M Club to greet them, look up fellow former students and contact them to make a job or personal connection, or host an Aggie Muster of their own—all with tools provided by The Association.

Although technology powers these functions today, they are also among some of The Association’s oldest services.

And they’re not benefits that every university can offer. In fact, Texas A&M doesn’t provide them: You do. More than 57,000 donors give every year so The Association can operate these and other programs for current and former students, faculty and staff.

At many schools, alumni programs are an expense the university pays for, but at A&M the opposite is true: The Association’s donors have become a major source of financial support to A&M and its current students.

Since 1942, when regular records are first available, The Association has raised more than $320 million for Texas A&M and for Aggies.

Millions of dollars from Association donors go to A&M scholarships annually, and hundreds of thousands of A&M students have benefited from Aggie traditions, student organizations and academic/ faculty support that you help fund.

Along the way, The Association has kept expanding and improving core services that were among the very first ways that Aggies sought to help each other.


How To Find Fellow Aggies

The A&M College’s doors had only been open three years when 11 former cadets met in Houston on June 26, 1879, and decided to start keeping a record of all their fellow former students, “thus promoting and maintaining fellowship.”

This Ex-Cadets Association was the first of a few groups that evolved into today’s Association of Former Students. In 1896, another one of those groups, Alpha Phi, made plans for a “fraternity book,” or directory of alumni.

The power of being able to find each other has always been a major strength for Aggies.

The first printed Directory of Former Students was issued by The Association in 1949, with over 600 pages listing more than 20,000 Aggies. A CD-ROM version first went out in 2000, and in 2002 the Directory went online at AggieNetwork.com.

Today, Association employees—web, database and records staff—maintain the database in partnership with the Texas A&M Foundation. In May, the database will encompass more than 500,000 former students.

Association staff built a powerful search function at tx.ag/FindAnAggie that allows you to look for a fellow Ag even if you only remember, say, part of their name and what their major was.

“Find an Aggie consistently ranks as one of the top-used web services we provide,” said Mike Smith, The Association’s senior developer and web manager. “We take pride knowing that our system is one of the premier online directories in higher education.” He and his team are working now on enhancing it further.

The directory is updated daily, and if you move to a new location and plug in your new address at tx.ag/Profile, you can automatically receive Muster invitations, local A&M Club news and other updates.

Organized A&M Clubs had their beginnings in 1897 with “local chapters.”

By the 1920s, a wave of new A&M Clubs was resulting from an Association effort to visit communities, designate a point person and provide bylaws.

Today, there are more than 200 A&M Clubs chartered by The Association. The Club officers and volunteers get assistance from Association staff and can tap into tools The Association provides, such as being able to email the Aggies in their geographical area.

“Some of our volunteers live so far from Aggieland, or they haven’t even been to campus anytime in years, but still have so much passion and love for Texas A&M and Aggies. The time and dedication they put into their Club and the events they put on are contagious,” Hale said.

The Association’s staff helps Clubs on a daily basis with everything from logo design to lunch announcements.

As it has for many decades, The Association also uses its publications to help push out announcements and news about these Club events, along with news from A&M.

The Texas Aggie magazine—which began in 1921 in a newspaper-style format, became a traditional magazine in 1966 and is now digital—has included calls to get involved with Clubs and photos of Club activities for 98 years.

Former student news went online in 1995 when The Association launched its website. In 2009, @AggieNetwork social media accounts began reaching hundreds of thousands of Aggies, as well as spreading A&M news and Good Bull to those on the outside looking in. 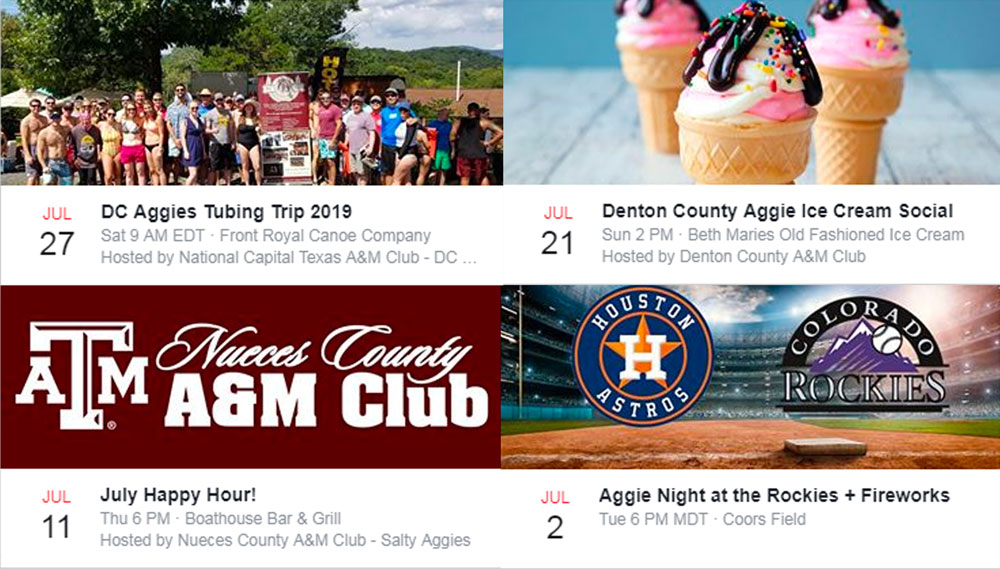 Above: Today, you can find A&M Club events like these, coming up in July 2019, on The Association's Facebook page at tx.ag/FBevents. Below: A January 1987 example of Club news updates that have been a regular feature of Texas Aggie magazine for decades.

No ‘Muster’ Without The Association

The Association played a major role in building the tradition of Muster—formalizing it, promoting it and even naming it.

In the early 1920s, The Association encouraged all A&M Clubs to hold gatherings on April 21. In 1923, it launched a concerted effort, calling for April 21 get-togethers around the state and nation, with a special radio program broadcast from campus.

During World War II, when a reported April 21, 1942, gathering of Texas Aggies under fire made nationwide headlines, the head of The Association seized the moment to turn it to greater good. E.E. McQuillen, Class of 1920, prepared hundreds of “Muster” packets—the first time the name had been applied—which he mailed to “Muster chairmen” worldwide for 1943.

It worked. There were over 500 Musters that year, and 600 the next. When students held their first campus Muster in 1944, McQuillen was the speaker.

Today, The Association supports more than 300 Musters worldwide and is actively working to increase that number.

Using publicity, email and its website—as well as the traditional method of mailing more than 250,000 Muster invitation postcards—The Association helps groups of Aggies come together each year. It provides Muster chairs with step-by-step planning assistance, resources and a database of Muster speakers.

The Association also maintains the annual Muster Roll itself. News of an Aggie’s passing can be reported at any time; visit tx.ag/AddAName for details.

In a recent addition to the Muster tradition, The Association began in 2018 a practice of reading all 1,600-plus names on the Muster Roll, in order to ensure that each was answered with a “Here.” This Live Worldwide Roll Call is streamed on the internet.

Even this list hardly scratches the surface of programs through which The Association helps current and former students—many of which also have a long history.

The Association took over the Aggie Ring program in 1969 at the request of A&M’s president, Earl Rudder ’32. It’s now the largest class ring program in the United States.

Since its first Class Agents were established in 1893 and first Class Reunion held in 1918, The Association has sought new ways to serve its A&M Classes. Among dozens of Reunions that Association staff help put on each year, 2019’s Sul Ross Group Reunion had over 1,000 attendees. In 2012, The Association created a Young Alumni Advisory Council; one of the council’s first suggestions was a Young Alumni Weekend, which now brings hundreds of recent former students back to A&M every fall.

You can learn about the many other ways Association programs help Aggies, and meet the more than 75 full-time staff members who make it happen, at AggieNetwork.com.

It’s taken more than a century to build up the Aggie Network. The Association is here to keep carrying on that work.

More than 50,000 Aggies, friends and supporters give an average of less than $15 a month to help provide all these services for current and former students as well as provide significant support to Texas A&M. You can add your support at any time by visiting tx.ag/give.