Aggies Invited To Mentor Veterans Moving To Their Areas

Leaving the military for civilian life is stressful, and the Aggie Network has been invited to take part in a program designed to help ease that adjustment.

It’s a critical transition: The suicide rate for veterans ages 18-34 has more than doubled in a decade, and the period of greatest risk is during their first year after leaving the military, according to the U.S. Department of Veterans Affairs.

Anyone can volunteer to be a friendly, welcoming connection and resource for a service member moving to their community through the ETS Sponsorship Program, a nonprofit Veterans Affairs and Department of Defense public-private partnership launched in nine states.

ETS Sponsorship leaders have partnered with Texas A&M’s Don & Ellie Knauss Veteran Resource and Support Center, which in turn asked The Association of Former Students to help get the word out to Aggies who may be able to volunteer as sponsors.

To become a sponsor, enroll at etssponsorship.com, get certified and complete three training sessions. You’ll be matched with a service member moving to your community and assist them on an ongoing basis in areas such as finding housing, employment and medical care and social/community activities.

ETS Sponsorship is currently operating in Arizona, California, Florida, Massachusetts, New Jersey, New York, Texas, Washington and Wisconsin. If you live outside these states but still want to become a sponsor, sign up and you may be contacted if opportunities open in your area.

“Although the time commitment is small, the impact is huge,” said Sean Hanna, an Aggie dad and current ETS sponsor who directs veteran mental health initiatives for a Texas-based policy institute. “Sponsoring a transitioning service member is extremely rewarding.”

Hanna said ETS volunteers get the help they need to be successful: “The support from the ETS team makes being a sponsor easy.”

ETS stands for Expiration Term of Service, and the program is based on a concept that is familiar in the military: When service members transfer to a new duty station, they’re assigned a sponsor to help them become familiar with their new location.

Texas is a particular focus for the program in this pilot phase, because it’s where 21% of veterans exiting the military plan to set up their new homes.

“One out of every five service members comes to Texas,” said Lt. Col. Joseph Geraci, a VA psychologist who is leading the VA’s evaluation of ETS Sponsorship.

That's a major reason why ETS Sponsorship reached out to Texas A&M, and then to the Aggie Network.

Another reason is service.

“Aggies, with their value of selfless service and their deep and rich tradition of military and community service, embody the attributes our transitioning service members recognize, respect and need in sponsors," Geraci said.

ETS Sponsorship is designed to help in exactly the ways service members need most as they leave the military. Research shows that these transition stressors — getting connected with employment, education, housing, family, community and medical needs — can be the greatest contributors to suicide risk as they re-enter civilian life, Geraci said.

Hanna said, “There is no greater way to show our appreciation to our men and women in service than to be ready to receive them when their watch ends.” 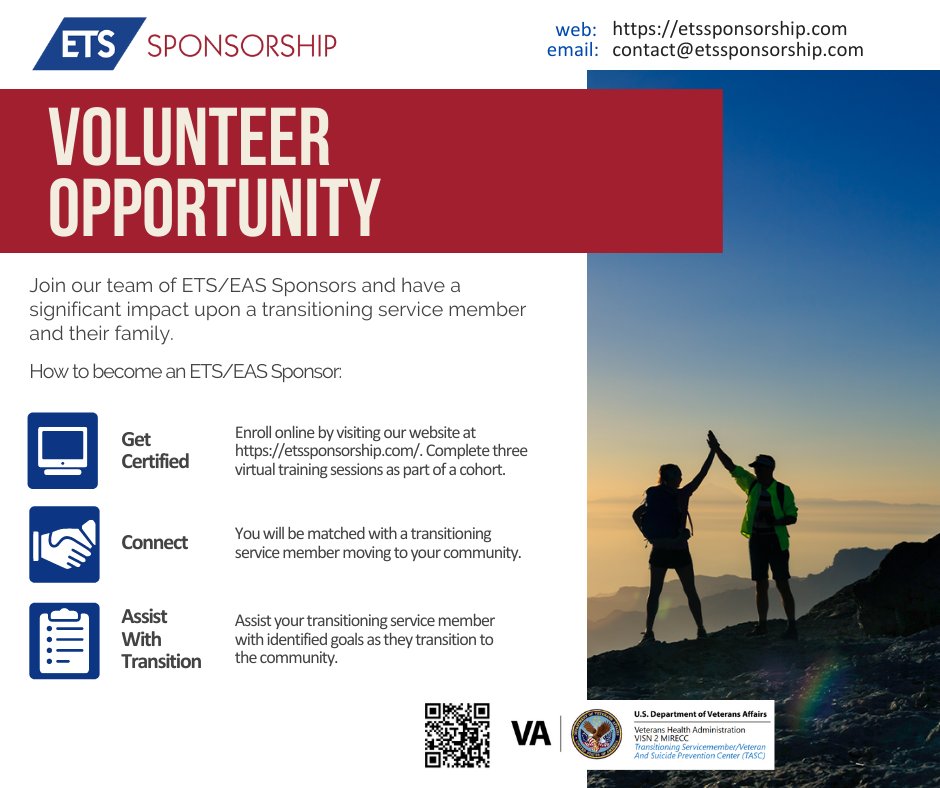 The Association of Former Students is the oldest organization serving Texas A&M University in support of the ever-growing Aggie Network. We are HERE for Aggies during their days as students and former students, THERE for Aggies as they make their way around the world and EVERYWHERE the Aggie Network needs us to be. To help us help more Aggies, visit tx.ag/Give.