For a third straight time, Hailey Kinsel ’17 has won the title of world champion barrel racer. And the world’s No. 2 and No. 5 barrel racers are also Aggies: Brittany Pozzi Tonozzi ’06 and Jimmie Smith ’18.

They were among five Aggies who competed in the “Super Bowl of rodeo” — the Wrangler National Finals Rodeo, held Dec. 3-10 in Arlington.

Jacobs Crawley ’11 came out ranked as the world’s No. 14 saddle bronc rider; he was previously the 2015 world champion.

“It takes a great horse, a little bit of luck and a whole lot of faith,” Kinsel told WPRA News editor Ann Bleiker ’98.

Appropriately for an Aggie, Kinsel won her 2020 title wearing back number 12.

Tonozzi was the world champion barrel racer in 2007 and 2009; Smith was barrel racing’s 2018 WPRA Rookie of the Year.

Kinsel, Crawley, Reeves and many others are alumni of the Texas A&M Rodeo Team, a student group that has received over $9,000 in support from The Association of Former Students since 2007 — including $2,500 last year to buy a bucking machine. 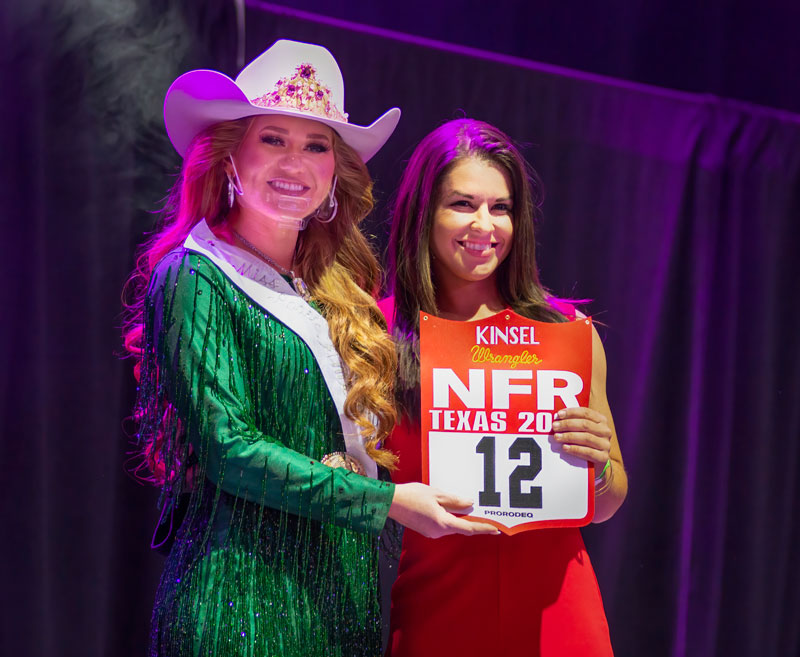 Kinsel was assigned back number 12 for the 2020 Wrangler National Finals Rodeo, presented in a ceremony with Miss Rodeo America 2020-21 Jordan Tierney. WPRA photo by Steve Gray

The Association of Former Students has a bold vision to engage 100,000 donors annually for Texas A&M by the end of 2020. To learn more, visit tx.ag/100Kby2020. To help us help more Aggies and support more Texas A&M student organizations, make a gift at tx.ag/Give.