Clayton W. Williams, Jr. ’54, a legendary Texas oilman and generous supporter of Texas A&M, passed away in Midland on Feb. 14 at the age of 88.

Williams provided millions to Texas A&M University through The Association of Former Students, 12th Man Foundation and Texas A&M Foundation, including the lead gift in 1985 toward the construction of the Clayton W. Williams, Jr. Alumni Center, named in his honor.

Porter S. Garner III ’79, President and CEO of The Association of Former Students, described Williams as a loyal and enthusiastic Aggie.

“Claytie was a great Aggie and a loyal friend. I will always remember his genuine emotion for Texas A&M and his fellow Aggies,” Garner said. “He was one of a kind and always wanted the best for Texas A&M.  I was continually inspired by his support and dedication to The Association of Former Students and to me personally.”

Texas A&M and The Association of Former Students presented Williams with the Distinguished Alumnus Award, the highest honor bestowed upon a Texas A&M former student in 1981. The Association also presented him a Core Values Coin, a small, rare gift to recognize Aggies who live and reflect the core values of Texas A&M.

In sharing news of Williams’ passing with The Association, his nephew Clay Pollard ’81 said, “Claytie loved A&M and Aggies with a deep passion, and they loved him back.” 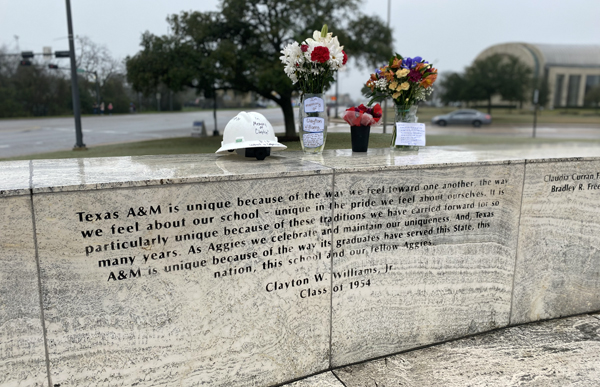 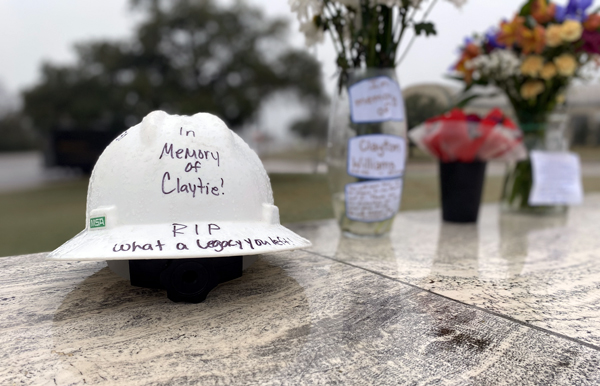 A helmet from Clayton Williams Energy Inc., the oil business Williams owned, was also left with a personal message.

The flags outside the Alumni Center were lowered to half staff also in his memory.

A visitation will be held 5-7 p.m. Tuesday at The Branch at 3800 N. Big Spring St., Midland. The funeral service will be held at 11 a.m. Wednesday at First Presbyterian Church followed by a private family burial.

Read more about his life here and his impact on Texas A&M here.