Music Activities Center On Track To Open In August 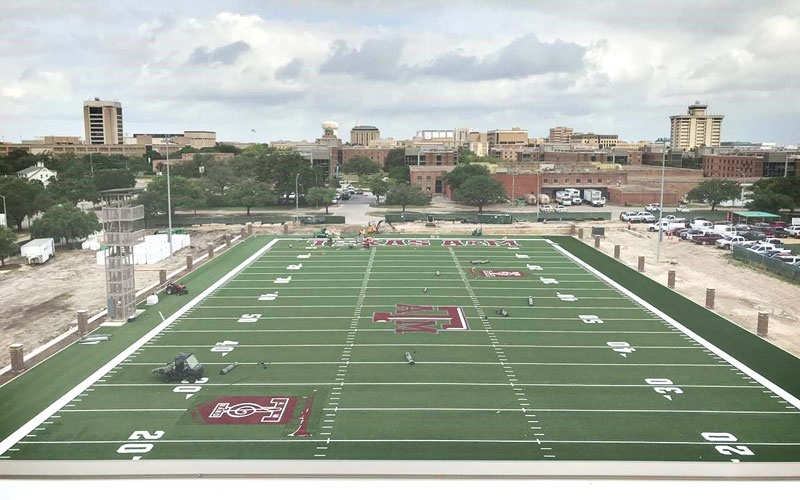 The project includes an artificial-turf practice field for the Fightin' Texas Aggie Band.

The Dunlap Drill Field is "marked off just like Kyle Field, except at the 20-yard lines, instead of the SEC logos, there are the official FTAB logos," said Col. Jay O. Brewer '81, senior associate director of the Aggie Band.

The MAC itself is "a dream come true, 25 years in the making," Brewer said — "a first-class facility for all Aggie musicians."

The 300-member Aggie Band hasn't been able to rehearse in the 50-year-old E.V. Adams Band Hall for several years due to safety concerns.

More than half the funding for the over-$40-million MAC project came from private donors, including $10 million from the Corpus Christi-based Ed Rachal Foundation.

Gifts made to A&M via The Association were not used to build the Music Activities Center. Association donors' gifts to the Annual Fund support a wide spectrum of student, staff and faculty activities. In 2017-19, that included $220,000 to help pay Aggie Band travel costs and $50,000 to help the Singing Cadets' outreach to former students and A&M Clubs.

The Association of Former Students seeks to perpetuate and strengthen the bonds that connect Aggies with each other and the university. Combined small gifts from 57,423 donors in 2018 made an impact on A&M of more than $12.6 million last year, supporting student activities, Aggie traditions, scholarships, faculty enrichment and former student services. The average gift was less than $15 per month. You can make a gift of any amount at tx.ag/give.