2019’s First Muster Held At A Cradle Of Texas History 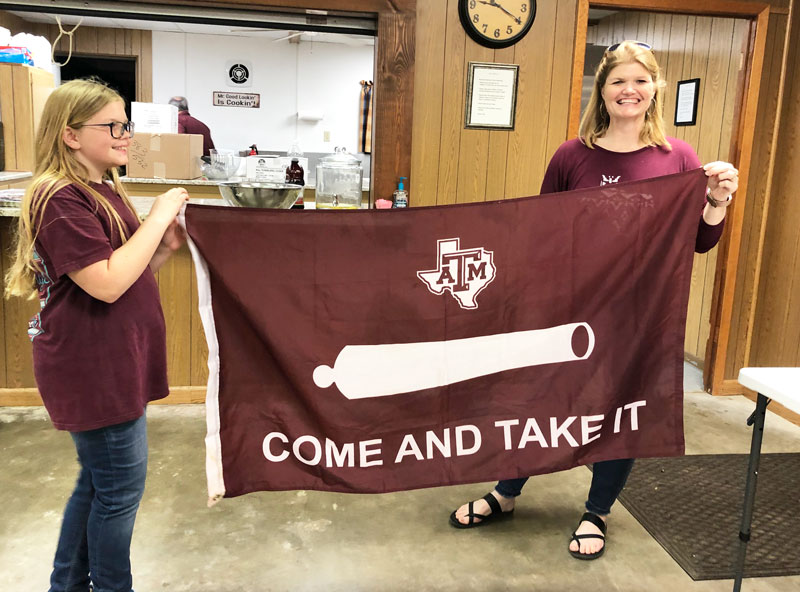 The first Texas Aggie Muster of 2019 took place where the first shot was fired for Texas independence: Gonzales, Texas.

Musters are happening on a wider range of dates this year than usual as April 21 coincides with Easter. Find a get-together near you, and check its date, at tx.ag/FindAMuster.

The Gonzales County A&M Club chose their date, April 12, partly because the local Knights of Columbus hall was available that day, but mostly because Josh Gray '08 said he was available to cook. He’s an Aggie barbecue expert, and he turned out beef tenderloin at a perfect glowing shade of red for the crowd of 50 or so.

Gonzales’ A&M Club isn’t quite as old as the famous 1835 cannon, but its ties to Aggie history are deep. One of Gonzales County’s first Aggies was a member of the Class of 1880.

And in what may be a unique Aggie tradition, the Gonzales Muster calls all its Aggies every year, no matter how long ago they passed.

That means every year, their Roll Call has dozens of names. When you arrive and sign in, you’re invited to walk over to the display to claim a few names to answer “Here” for. 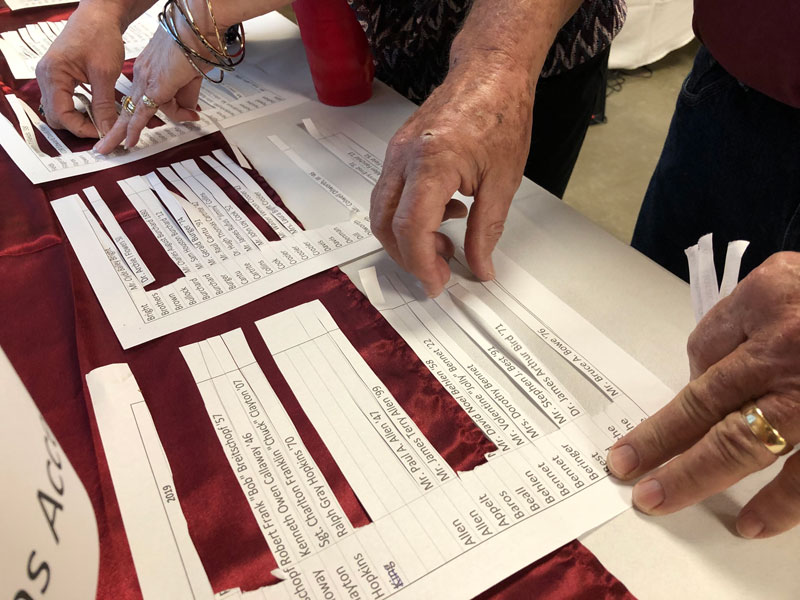 You’ll get your meal ticket, then find a place to sit at the tables decorated with maroon satin, ivory candles and maroon silk roses.

“Our decor is mostly leftover wedding decor,” says Muster co-organizer Celia Glass '79, “but a few years ago Sue got the high school floral class to do centerpieces.”

That’s Club president Sue Gottwald '77, who helps organize the Muster with Glass and others.

Gottwald says the Club has given $40,100 in scholarships over the past six years, including two perpetual (endowed) scholarships and several Aggie Ring Scholarships. 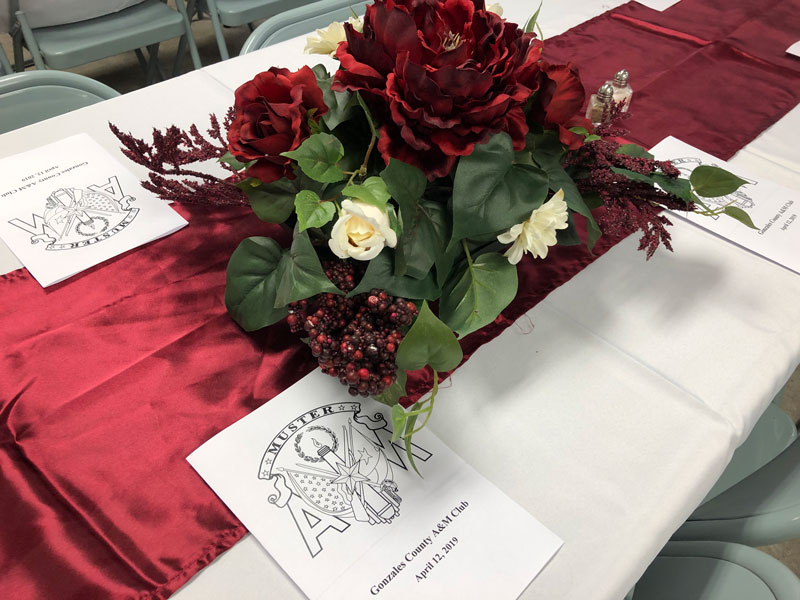 “We have been giving out $200 toward the Rings, but the fundraisers have been so successful, we plan on bumping that up,” Gottwald says.

Out by the barbecue pit, past president Scott Dierlam '93 describes the Club’s regular fundraisers: They hold a fish fry each June and sell chili/tamale dinners at a large local antique/craft market; in February, they sell prepackaged “Super Bowl Meals” so you don’t have to cook for the big game. Their raffle at the town's summer concert series has also been bringing in lots of money for scholarships recently.

You might meet a scholarship applicant in line to get your dinner plate with salad, baked potato and that buttery tenderloin.

Bailey Blair '23 has already been accepted to A&M; she’s applied for a Gonzales A&M Club scholarship, hopes to get into the Hullabaloo Hall dorm on the Northside of campus and is planning to major in biomedical science.

Bailey Blair '23 of Gonzales will head to A&M this fall for her freshman year. Josh Gray '08 serves up the goods he's been barbecuing outside.

After everyone has a chance to fill their plate, then sit back down and eat in a Thanksgiving-like family atmosphere, Glass picks up the microphone to let them know they can get in line for desserts next. (She made the large pan of peach cobbler, which has cinnamon dusted heavily across the peaches.)

Once folks are seated with their desserts, Glass again rises to call on everyone to stand and introduce themselves with their A&M Class year.

This harks back to one of the oldest Aggie Muster traditions, if the first “Muster packets” that The Association sent to Muster chairs are to be believed.

Those packets said, back in 1943: “The traditional Roll Call is a good opener. Each man stand, give name, class, rank (if in service), home town (if in service) - and any other information you think would be of interest.”

This is exactly how it proceeds at the 2019 Gonzales Muster - we each rise, give our name and Class year, and some introduce their family or guests. The years range from Class of '68 to '23 (Bailey), plus some small future Aggies (2033 or so). 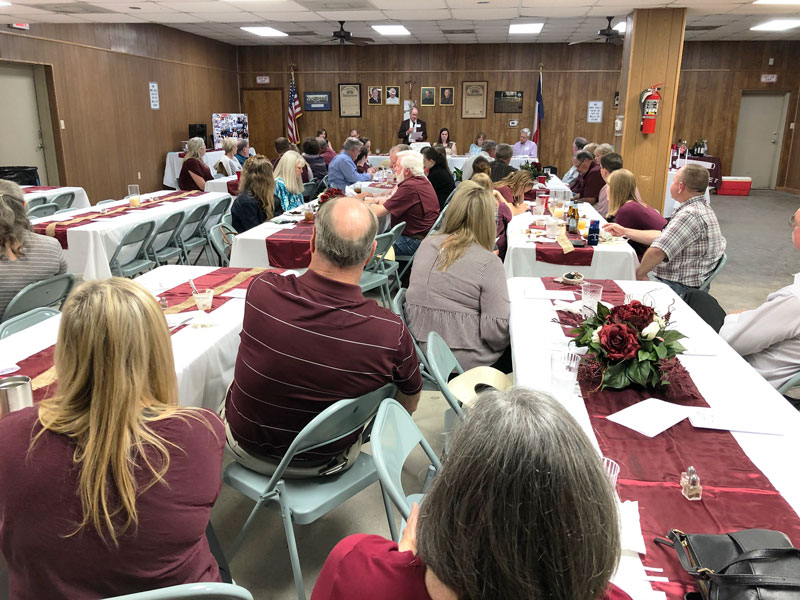 Our Muster speaker this evening is a current Aggie student - junior Claire Pavliska ’20, a member of the Aggie Network Student Ambassadors, which is The Association’s student group.

Pavliska tells how she got her Aggie Ring that morning, right after taking a microbiology test. (“If you have any questions about microbiology, find me after!”) She speaks about meeting a Class of '54 Aggie at a campus event, and learning how much they had in common simply through the fact of being Aggies.

Candles are lit and the Roll is called. From within the half-darkened hall, voices answer “Here”: some quietly, some choked with emotion. 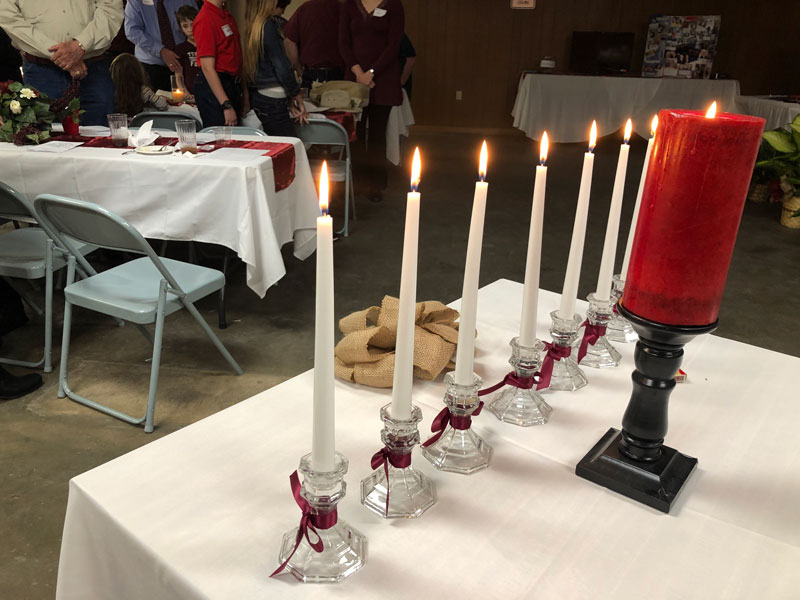 Glass plays the recorded bugle call of “Silver Taps” over a speaker, and Bill Hyman '71 reads “The Last Corps Trip.” With the final verse, a number of Aggie tears well up in the room.

Together, we sing “The Spirit of Aggieland.”

And then Glass gives the traditional closing, with its conclusion: “The Muster is dismissed until April 21, 2020."

Find an Aggie Muster near you at tx.ag/FindAMuster! Every year, donations allow The Association of Former Students to provide services to hundreds of Aggie Musters and to collect and share Texas A&M-related news with thousands of Aggies. Add your support: tx.ag/give.