Sam Smith ’49 flew B-17s in 24 bombing missions with the “Hell’s Angels” in World War II before he had even earned his chemical engineering degree from A&M, and he remembers when he paid $25 a month for student housing. He’s a man who loves a challenge and says he is always making something, doing something, or fixing something to make it do better.

This summer marks his retirement, as the 92-year-old WWII veteran worked his last day as a petrochemical engineering consultant on July 15. We took the opportunity to speak to Sam in late May, and he shared some memories with us of his life as well as his time at A&M. One memory he shared was of a mission he flew on March 1, 1945, that would later earn him the Distinguished Flying Cross.

Sam recalls, “I looked down at my front wheel and had a hole in the wheel the size of a grapefruit. That was why I had so much difficulty holding the plane on the runway.” Sam was the aircraft commander of the 360th Bomb Squadron of the 303rd Bombardment Group and on a particular mission in Hopsten, Germany, his B-17 had taken several hits. Landing the severely damaged aircraft on the runway safely was no easy task.

Sam was the first to land, and knew he had to get off the runway to allow those behind him to land safely because they didn’t have enough fuel remaining to loop back around. Sam’s airmanship and outstanding maneuvering ability saved the lives of the rest of the squadron that day, and he was finally recognized with the Distinguished Flying Cross award for this feat in 2012, some 65 years later. 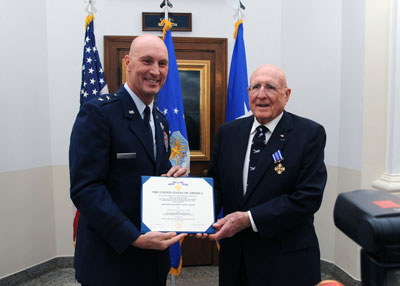 Coming home was no easy task either. Smith shares the story of how his crew ended up with two extra men on the way back to the states in this recollection.

Sam was given one-month leave and returned to Goldthwaite, where he dated and married Mary Ann Miller. Days later, the war was over and the newlywed couple made their way to A&M.

“When I volunteered in 1942 and was accepted as an aviation cadet candidate, as I was going to Dallas to join I met Officer Shanafelt,” Sam said. Samuel Shanafelt II had spent two years at North Texas Agricultural College in Arlington and was planning to attend Texas A&M.

Sam said nearly every place he and Shanafelt would go, the squadron officers were always all Aggies, which made him interested in A&M. "Shanafelt and I were co-pilots, flying B-17s, and we became close friends, and that's what led me to Aggieland.” 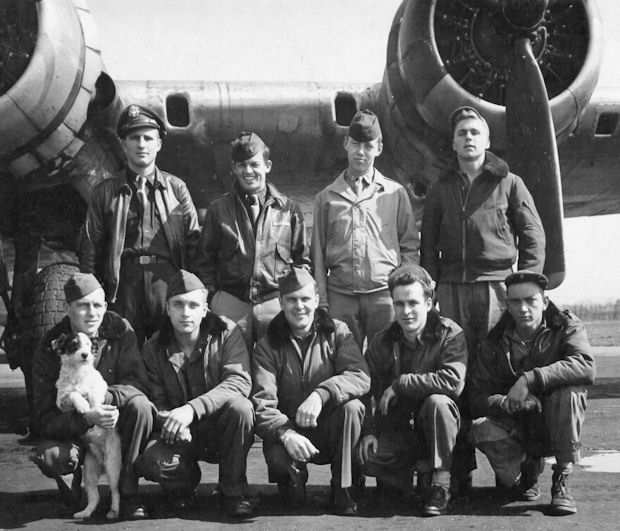 When Sam and his wife arrived in College Station, married student housing was not yet an option, Sam, being an engineer, decided they would build a house. He said, “I drew us a plan and we built a little old house on Cooner Street and I nearly flunked out of the school because I spent too much time building and not enough studying, but we got it built.”

By the time Sam was a senior, reconditioned Army barracks running along the street right across the road from the college were converted into apartments for married students.
Sam said, “It was $25 a month to live there so we put our house on the market and sold it. We made $800 and bought a car for $500 - an old 1943 model WWII Buick, and so then life went on.” 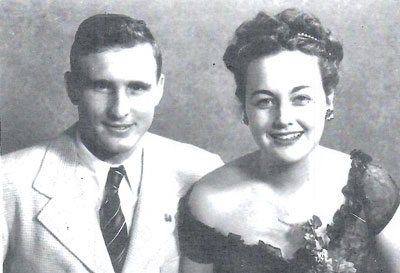 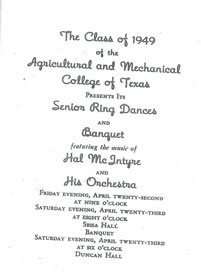 After graduating, Sam worked in Spring and San Antonio before deciding that the good jobs were in Houston, where he started an engineering company. He grew his company to 90 plants around the U.S. and South America and spent 40 years there before selling the business.

Sam and Mary Ann shared 69 years of marriage before she passed away in November 2014. Sam told us that because he went to A&M, "about 12" other family members chose to follow in his footsteps and attend A&M — which certainly seems like a fitting number.

What else has Sam been doing since the war? Besides his consultant work, Sam has been an active member of the Sons of the Republic of Texas and spent a handful of years personally researching, measuring, designing and building a replica of the Twin Sisters cannons.

Sam and nine others on his cannon crew went to cannon school to be able to legally fire the replica cannon in a federal or state park. Aptly named “The Other Sister,” Sam’s cannon and his crew traveled around the state and did shows on school grounds in Kerrville, Fredericksburg, and the San Jacinto Battlefield.

When it was determined the cannon was no longer allowed at school shows because it set off too many car alarms, Sam decided to permanently donate the cannon to the Boonville Heritage Park in Bryan, where it is on display and open to visitors. 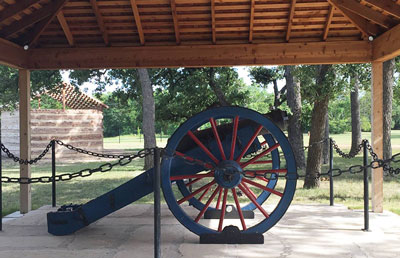 Sam's replica cannon, "The Other Sister."

When we spoke with Sam, he was getting ready to travel back to his hometown of Goldthwaite to attend a dedication ceremony on Memorial Day for a new monument dedicated to WWII veterans of Mills County. He also said he was busy working on producing a book to share these same stories and various others from his life. Join us in wishing Sam the best in his retirement. 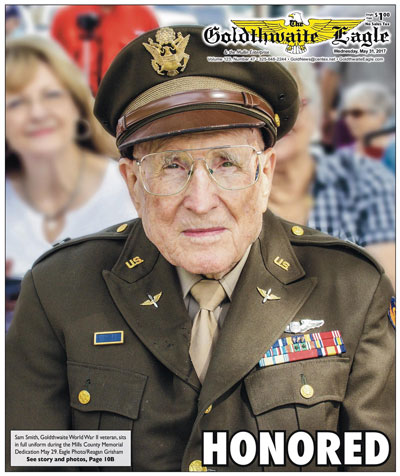 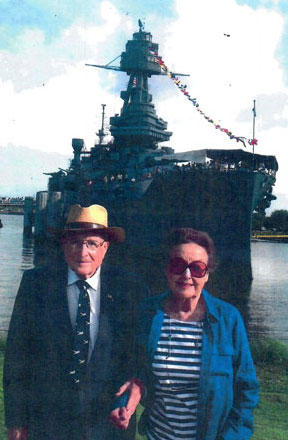 Left: Featured on the front page of the Goldthwaite Eagle, Sam sits in full uniform at the Mills County Memorial Dedication on May 29, 2017. Photo by Reagan Grisham.
Right: Sam and Mary Ann, June 6, 2014. In addition to receiving the DFC, Sam was awarded the French Legion of Honor during a special ceremony aboard the Battleship Texas on the 70th anniversary of D-Day.  Photo submitted by Sam Smith.

To learn how you can nominate eligible American WWII veterans for the French Legion of Honor, visit https://www.aggienetwork.com/news/143773/nominate-a-wwii-veteran-for-frances-highest-honor/.

The Traveling Aggies have a special trip planned for 2019 honoring the 75th anniversary of D-Day. Find more information about the trip here.