What could A&M look like in the 2030s? New master plan adopted

Texas A&M’s 2017 Campus Master Plan, adopted by the university in May 2017, lays out guidelines and projections for the next 15 years and beyond.

It's not set in stone — rather, it sets a direction for the future. Many parts of the plan can and no doubt will change. And it doesn't include every single project in the works. But it does take a large, comprehensive look at the future using factors as diverse as expected growth, College Station weather and stormwater drainage, emergency vehicle access, bicycles and buses, historic architecture, the importance of clear signs, and sustainability.

The full document is available in this 460-page PDF.

Here’s a quick skim through some points of possible interest, including a look at each five-year phase.

Not unlike the 2004 campus plan before it, this plan seeks to unify a lot of what’s now called “west campus” and “main campus” into a seamless-feeling workable, livable area that is primarily a pedestrian zone.

Many existing parking lots would be replaced (some quite soon) by green spaces, and 10 new parking garages could eventually be spaced mostly around the perimeter of campus.

A relatively small number of non-historic or past-their-use buildings could be removed and/or replaced (more detail below).

New dorms are coming on west campus and possibly on Southside. Existing dorms will be renovated rather than knocked down, and in some cases will be expanded and connected to each other. New outdoor “quadrangles” would encourage social use on Northside and in the engineering sector.

Also in the plans: replacing the parking lots around Reed Arena with two garages and open event space; and potential future development in the “Campus Front” sector to include academic spaces with retail and dining on the ground levels (p. 78). 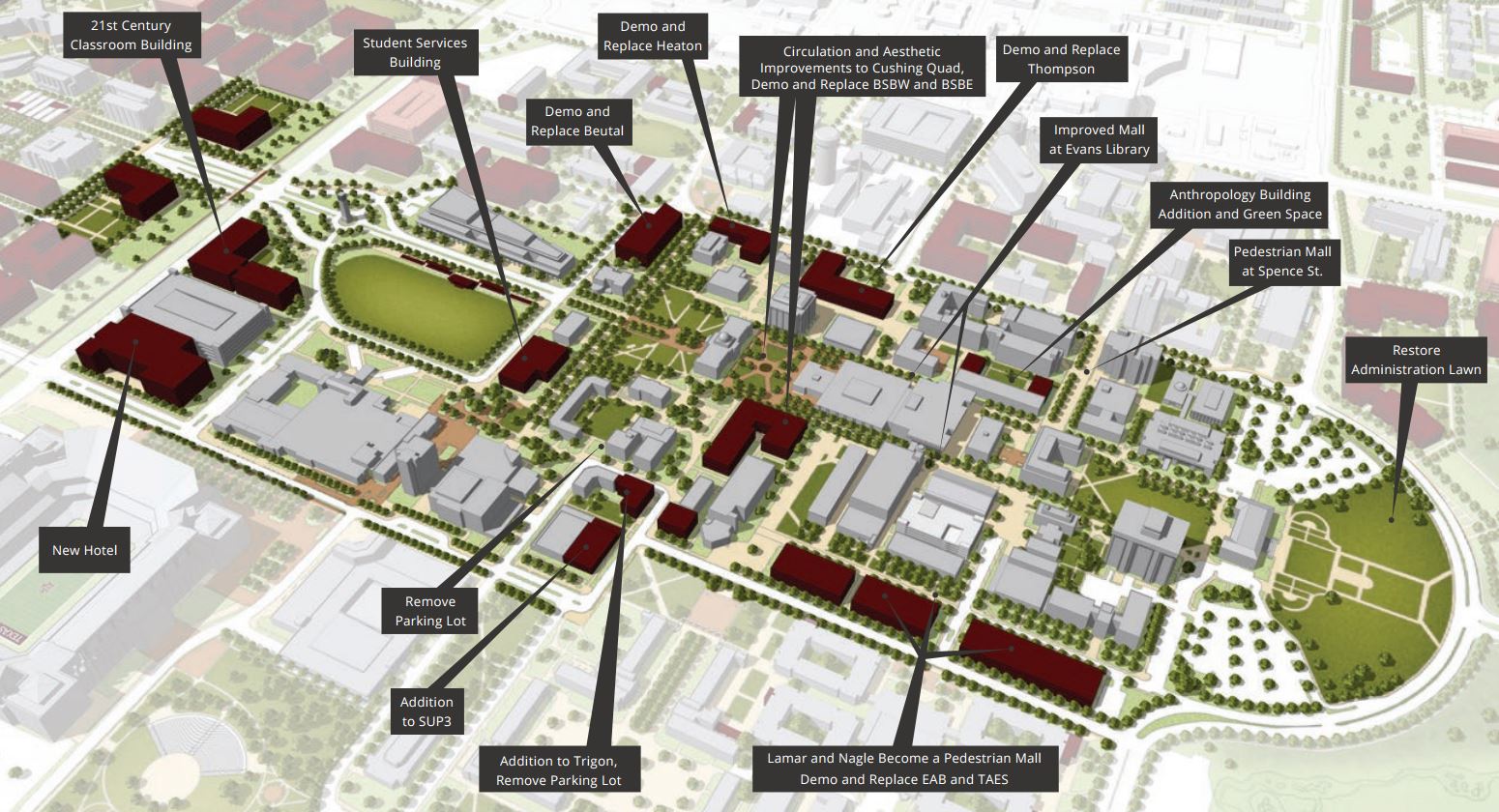 Possible changes to the “historic core” of campus over the next 15 or more years, p. 89. 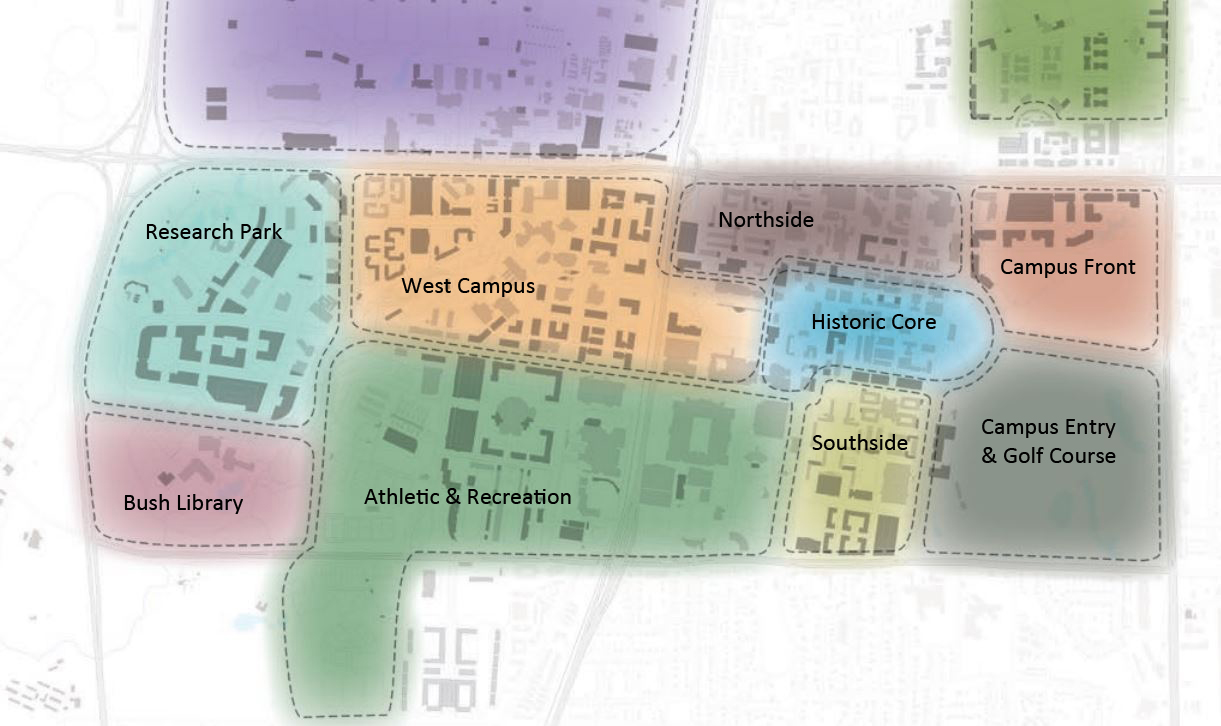 The total number of parking spaces would drop slightly on main and west campus, with the largest parking-space gains coming in Research Park and at the Health Science Center in Bryan. The area that would eventually become pedestrian-only is shown on p. 153.

For a quick review of how campus has (sometimes haphazardly) evolved up to this point, go to p. 32.

Go to p. 138 to see the projects that are in the works now (planning and design phase) – these include a plant pathology building; the new facility for the Aggie Band and other music programs; stadiums for track and field and softball; and the 40-acre Gardens.

New buildings in this phase include a pavilion on west campus and a Campus Front parking garage.

The second phase (p. 142), projects that are 5-10 years out, will aim to fill in underdeveloped areas and under-used areas. This period includes a new Northside parking garage near the Fowler/Keathley/Hughes dorm complex, as well as potential demolition and replacement of some buildings.

Third-phase projects (p. 144) that are 10-15 years out include a few more building replacements on main campus, as well as adding several west campus residence halls and a parking garage.

More than 15 years away are two parking garages at Reed Arena; possible new Southside dorms; final phases of development of Research Park, and potential development mixing academic, retail and dining along the front of the campus by University Drive.

Some old buildings may go

Campus buildings 50 years old and older are classified in the plan (pp. 360-368) based on their historic importance and present condition.

Among those the university is committed to preserving are the Academic Building (built in 1914) and many others. Also protected are some historic outdoor spaces that mean a lot to Aggies, including the Academic Plaza and Simpson Drill Field.

Though some buildings are mentioned for possible demolition, the plan states that each will be assessed and alternatives explored. Most, like the Beutel Health Center (1974), are described as “demo and replace.” Included are Beutel, Henderson (1958), Reed McDonald (1967), the Engineering Innovation Center (1955), Halbouty additions, Doherty (1960), Heaton (1926), Old State Chemist Building (1909), Biological Sciences buildings West (1967) and East (1950), Thompson (1921), the Engineering Activities Buildings (1949-54) and the Texas Agricultural Experiment Station annex (1933).

No dorm demolition; some new halls

In a departure from the 2007 plan, the university doesn’t plan to demolish any more old dorms, but rather rehab them and connect some as in the recent Corps Quad renovations (p. 96). One reason given is the ability to continue offering housing at a range of price points (p. 122).

New dorms mentioned in the plan are more White Creek residence halls on west campus and four potential Southside dorms (including space for the Aggie Band) that may be pretty far off in the future (p. 96). 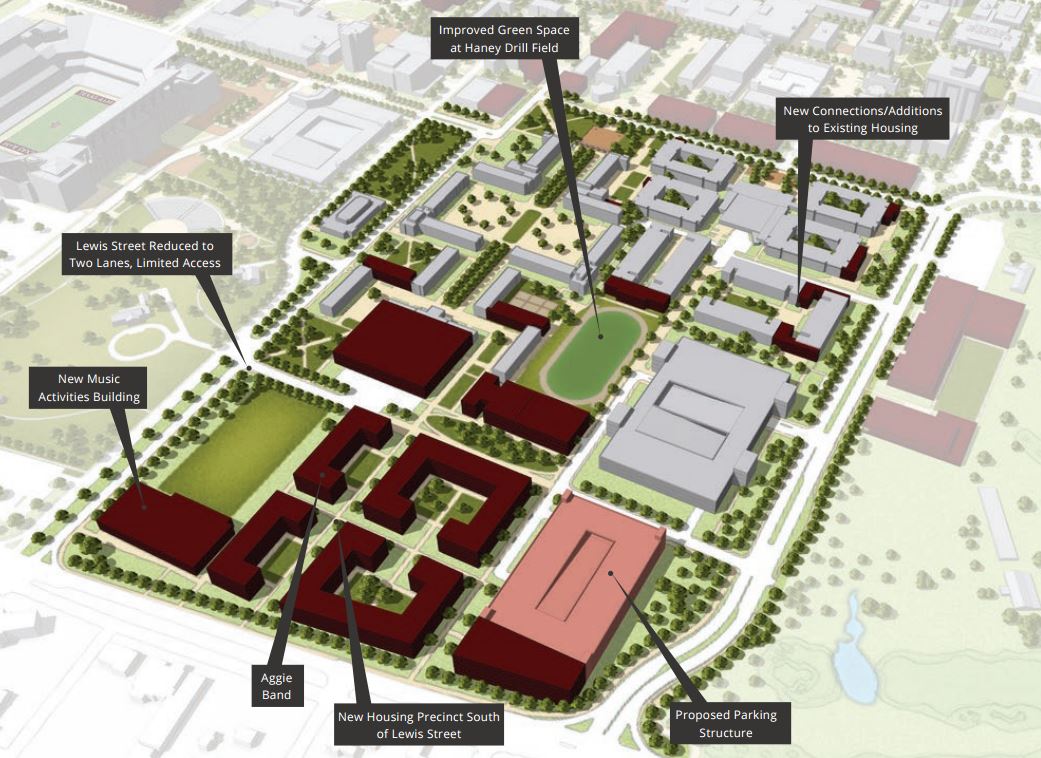 Possible changes on Southside -- some coming soon, some 15 or more years away, p. 95. 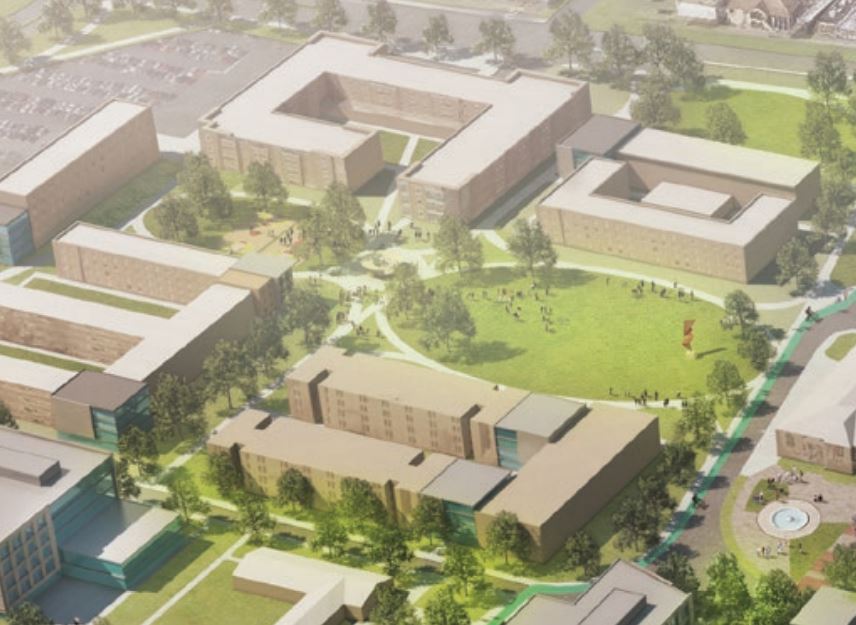 Closeup on p. 84 shows planned Northside quadrangle and new connectors between some of the dorms.

The plan includes architectural guidelines or expectations (p. 260) for future buildings, rather than dictating specifically how they should appear.

By carrying some themes through in the facade of new buildings, the plan says, new projects can be integrated into what’s already there. These attributes include having a defined base, middle and top; a main entryway that is clearly identified; “end bays” that stand out visually; and vertical window spacing.

You’ll see a lot of glass in the plan’s examples, as there is an emphasis on being able to view activity inside a building and into learning spaces. 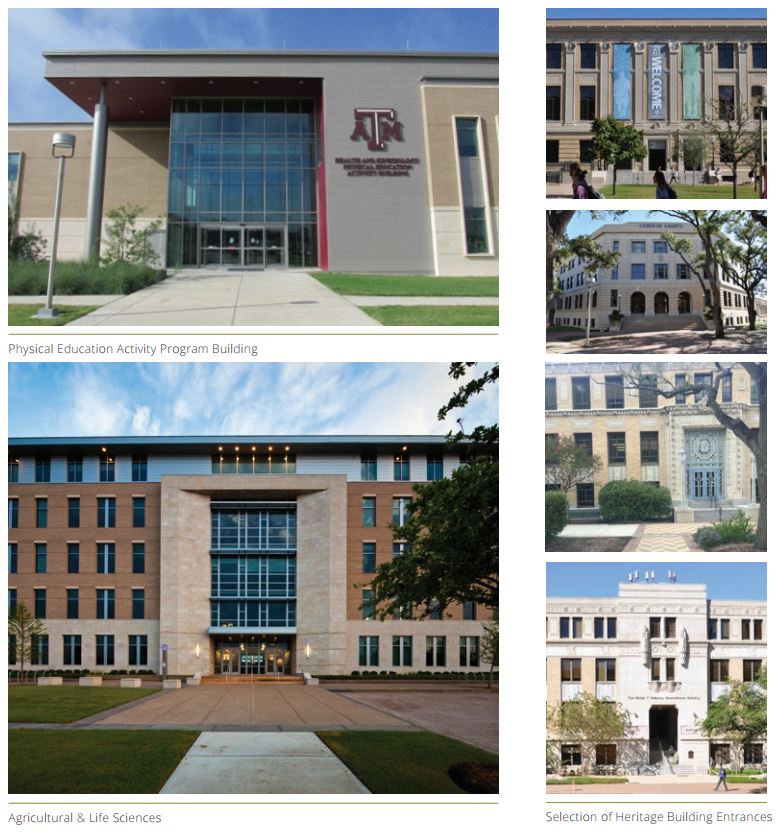 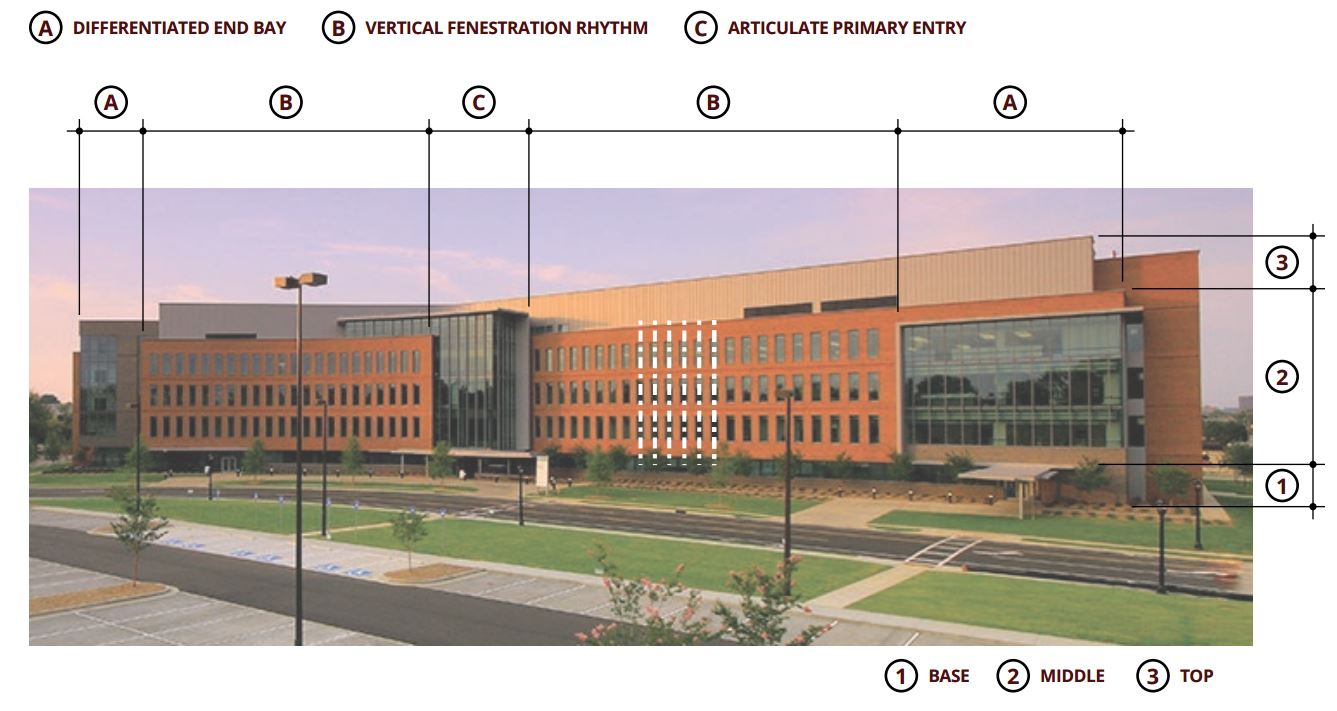 Cream-colored limestone can unify new buildings visually with the existing buildings, and tan or buff-colored brick is in keeping with most areas of campus, with some red-brick exceptions (the Corps Quad and similar buildings, and structures in the “athletics” region, like Blue Bell Park and Kyle Field facades and new stadiums).

View some specific guidelines for different areas of campus on p. 273.

And remember, change is always with us. Here’s a campus master plan from around 1910: