On April 7,  The Association of Former Students expects to welcome more than 30,000 guests to the Clayton W. Williams, Jr. Alumni Center as some 6,200 Aggies each receive their Aggie Ring.

Pickup times have also been scheduled for the morning of Saturday, April 8 to accommodate the record number of Aggie Ring recipients. Visit AggieNetwork.com/ring/ringday for all details.

This year, Ring Day falls during Family Weekend; a list of confirmed events taking place on campus can be found at http://familyweekend.tamu.edu/events.

As the excitement and anticipation build toward this momentous occasion, we share an excerpt from a former student's description of her personal reflections one year after her own Aggie Ring Day. We hope you enjoy Holly's words and can relate to her positive experience.

The Aggie Ring to Aggies is what “The sultan of swat!”, “The king of crash!”, The colossus of clout!” ... “THE GREAT BAMBINO!” is to The Sandlot—as I sit here on the eve of a Fightin’ Texas Aggie Ring Day, exactly one year after I received mine, I think about how excited fellow Aggies and soon-to-be Ring wear-ers are right now. Heck I’m excited for them! The countless hours of studying/tutoring/projects/homework, numerous blistering hot days spent at Kyle Field BTHO whoever came to town and occasional visits to North Gate are all summed up into one little Ring made of gold. It’s a symbol of where we have been and a token of achievement to take with us as we embark on adventures long after graduation from Texas A&M! WHOOP!

If you’re receiving your Ring [this April], know someone who is or anticipating receiving one in the future and you’re feeling a bit excited right now, you’re not alone. [Ring Day] is a great day to be an Aggie! Actually, every day is. We anticipate receiving an Aggie Ring our entire college career and some of us for a lifetime. It is a symbol of achievement, hard work, the ability to reach great heights and “the most visible symbol of the Aggie Network”. Whoa! Can you hardly stand it?

My Ring Day was no exception. September 25, 2015, very well may be one of my favorite days. Ever. The entire day was filled with excitement, family and friends ... what more could you ask for?

On that sunny, September day my family and I headed over to The Association of Former Students and battled the 100-degree weather, the masses of people and the thousands of camera flashes from every mom. By 2:30 I proudly sported that piece of gold that I wanted my entire life. I was finally part of THE network that is well known for spontaneous conversations between two total strangers, simply because we both have THE Ring. It’s fair to say receiving my Aggie Ring is definitely one of my proudest accomplishments.

Now at the time, once I received my Fightin’ Texas Aggie Ring, I would joke that I didn’t need a diploma ... having this Ring would be sufficient! Once again, this was a joke—personally, giving up one semester short of graduation wasn’t an option, and that mentality certainly wouldn’t fly with my parents, so I did receive a diploma 8 months later.

It was at that moment as my name echoed through Reed Arena, I stepped onto the stage in front of 12,000 proud Aggie family members, shook Dr. Jones’ hand as he handed me my diploma and hugged the line of professors who taught me over the past 3 years that I realized it was only the beginning for me and my Aggie Ring!

In the 2 short minutes that followed as I exited the stage, gave a wave to my family and stopped for a quick professional photo to document the event, a slew of emotions entered ... positive ones. The general synopsis of these emotions was that I have a whole future ahead of me that I can make whatever I want it to be. As I took my seat to watch the rest of the ceremony, I had a new appreciation and understanding of what the Aggie Ring means to me. So here’s my take…

The Aggie Ring isn’t something you dust off in 50 years and show your grandkids, it’s something we continue to wear even after it’s a little less shiny, worn down and not as defined. It’s a traveling journal of our successes, adventures and the people we meet- a tangible object of our journey through life. Sure it houses those great college memories, but it the ones that have yet to happen that makes receiving an Aggie Ring so special. Think about how you’ll feel in 50 years when a recent Aggie grad comes waltzing up to you, looks down to admire your worn down Ring and asks what year you are—immediately you begin to tell your story. I can’t even fathom what I would say because I’m so excited about the future and what it holds.

A year ago, today was the near future for me. In 365 days my Aggie Ring and I have been though graduation, job interviews, offers and now my first job. WHOOP! Accomplishing this in a short time frame is thrilling to me and instills a curiosity into what’s up ahead. While I can’t forecast the future, I can assure you that the moment I was presented my Aggie Ring my story just began.

[On April 7,  6,200] Aggies will begin writing their story to share with future generations and I truly believe as Aggies we have a lot to offer this world! So ... be proud, give your Ring a story to tell and embrace the fact that it’s just the beginning! 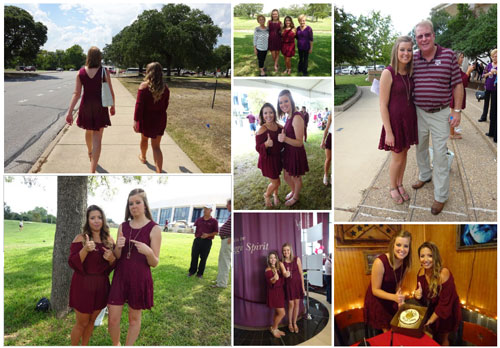 If you are interested in helping ensure that the Aggie Ring is available to every Aggie who has earned the right to wear one, we invite you to learn more about supporting the Aggie Ring Scholarship Program.