That Famous Kyle Field 'Selfie' Is A Fake

You have probably seen on social media an image that posters claim is a self-portrait taken by a fighter pilot during a flyover at Kyle Field. The photo, which is often labeled as "the greatest selfie ever taken" or "the selfie to end all selfies," is a fake -- and not even a very skilled fake at that.

In most cases, the image has appeared with the claim that it was taken at the 1999 Aggie football game vs. the University of Texas.

Below is the original background photo of Kyle Field which was used to create the fake "selfie." It does depict Kyle Field during the 1999 Texas game, but it was taken from a blimp, not from a jet. 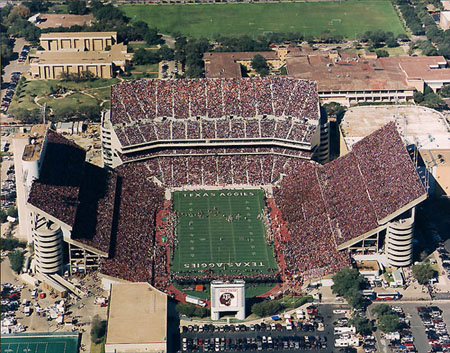 The image of a pilot and the images of several F-16s were digitally added to that background image. On close inspection, the areas where the players and officials in the original photo were erased from the field are clearly noticeable as blurry areas in the faked image.

This was the first version of the fake image to appear online: 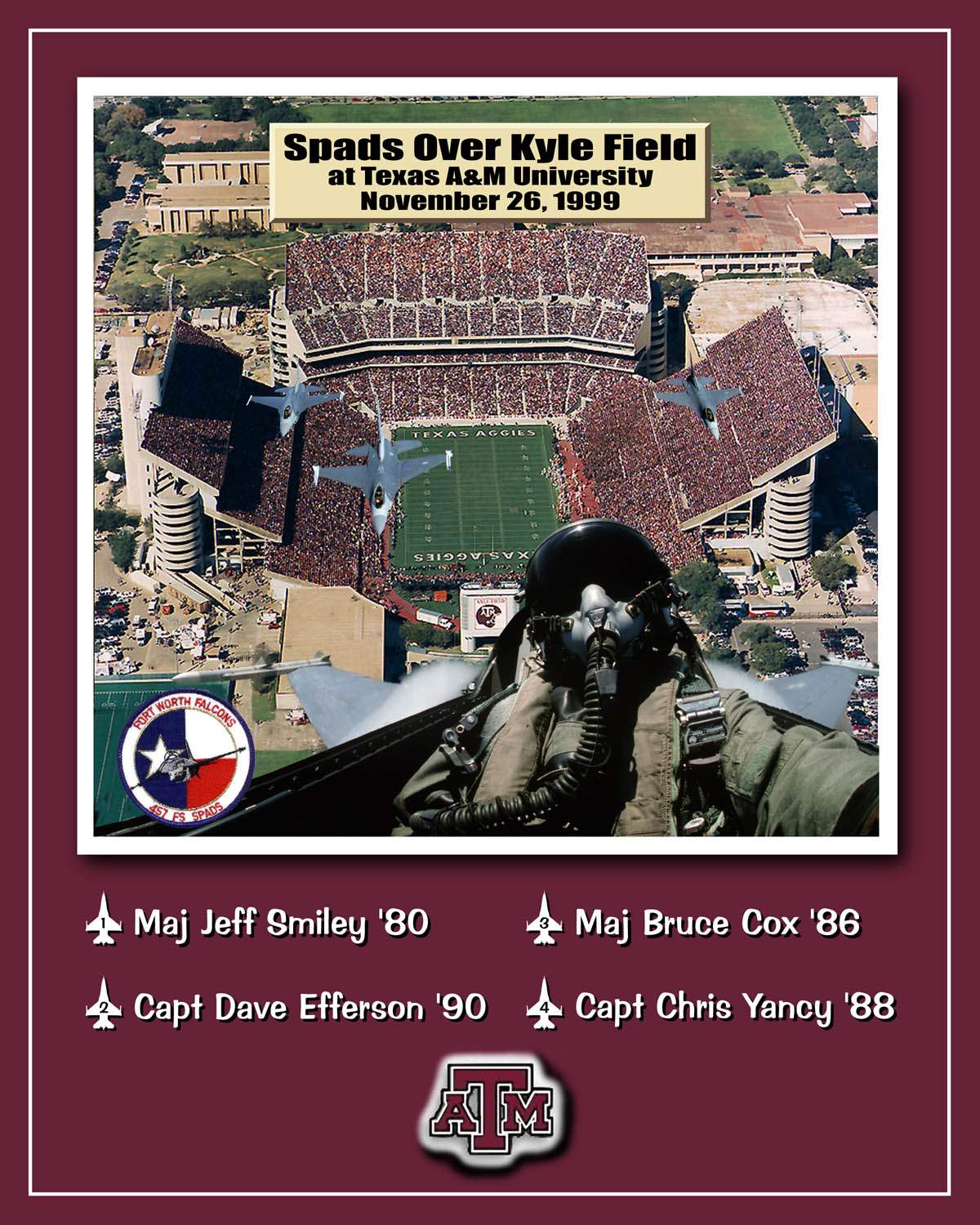 The poster above was created (with no ill intent) by a person affiliated with the U.S. Air Force Reserve's 457th Fighter Squadron of the 301st Fighter Wing, based in Fort Worth. Four pilots from that squadron flew F-16 Falcons over Kyle Field on Nov. 26, 1999, in remembrance of 12 Aggies killed in the Aggie Bonfire collapse of November 18, 1999. All the pilots in the formation were former students of Texas A&M.

The poster was an attempt to memorialize that flyover; however, there are many clues in the image that it is not an actual representation of that event.

For starters, flyovers of Kyle Field always take place with the planes approaching from the south and exiting to the north, which is the exact opposite of what is pictured in the faked image. Tens of thousands of witnesses who were present at Kyle Field for the 1999 Bonfire flyover can confirm that the jets on that day flew from the south to the north, as they always have, and not from the north to the south.

Second, there is no visible canopy above or behind the pilot in the foreground of the faked image. Here is a real photo taken inside the cockpit of a plane. Note that the canopy, although it is clear, is nonetheless visible because of how it reflects and distorts light. 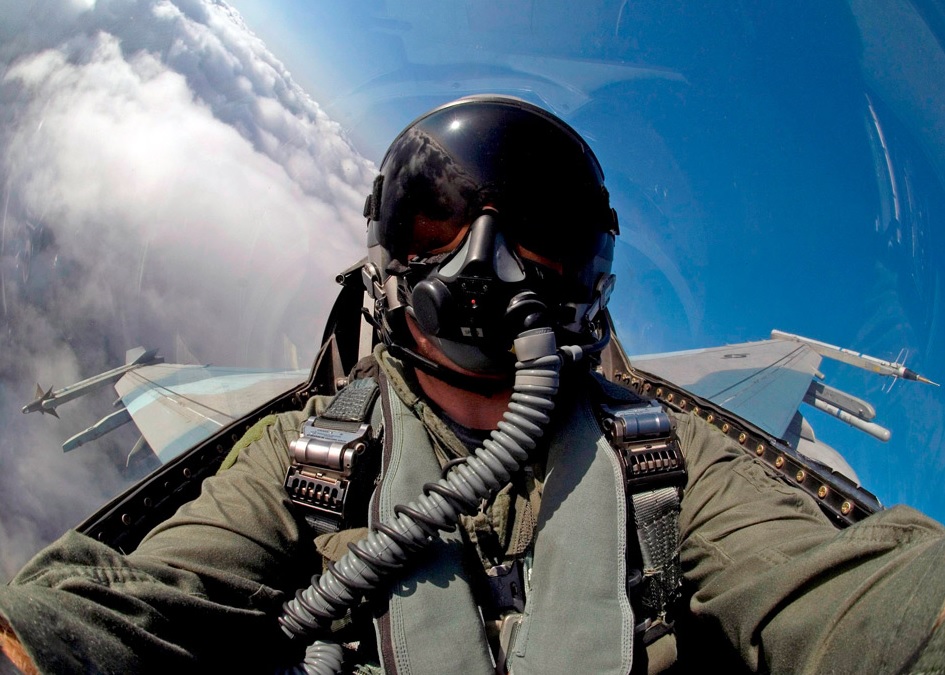 The faked image also displays various other errors that prove it is not a real photograph:

The myth-debunking website snopes.com has a long discussion thread about this image. The participants in that thread concluded it was fake for many of the same reasons stated here. In addition, a user named Bonnie claimed to have spoken with Eric Hehs, editor of Lockheed-Martin's Code One Magazine, which published the picture in the early 2000s.

[Hehs] tells me that "it's a composite photo that the USAF Reserve group here in Fort Worth did sometime back."

Although the faked image has circulated for almost 20 years with captions claiming it was from the 1999 A&M vs. Texas game, it reappeared in 2015 with claims that it was taken at the opening of the rebuilt Kyle Field. Even the most cursory examination makes it obvious that the image does not picture new Kyle Field.

If you wish to share this page with others, here is a short url that will bring the reader directly this this page: tx.ag/ItsAFake

In September 2015, after the redeveloped Kyle Field opened, Fletcher Massie '09 posted this image on Twitter of an "unbelievable selfie at new Kyle field": 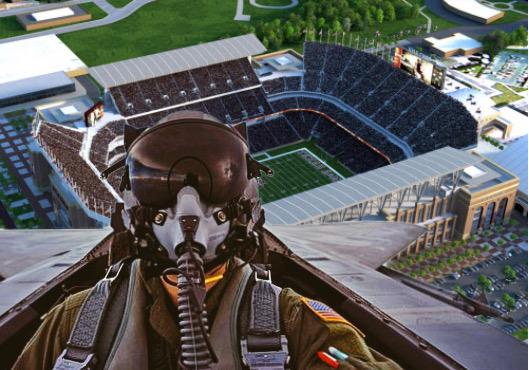 Unlike the previous fake "Kyle Field selfie," Massie's post was intended as satire--specifically, a satire of the original fake "selfie" that many people thought was real. Nevertheless, 15 years from now, we'll probably have to publish an essay explaining how to tell that Fletcher's post is not a real photo.

Thanks a lot, Fletcher.

To join the tens of thousands of generous Aggies who donate to support Texas A&M and Texas Aggie, visit. tx.ag/give.