A Class of 1939 Aggie killed in the Korean War was recently identified among remains in 55 caskets sent to the U.S. last year from North Korea, the first such remains to be returned in over a decade.

Fellow soldiers’ accounts describe U.S. Army Maj. Harvey Storms ’39 as a hero of the battle of the Chosin Reservoir.

He was initially classified as missing in action in 1950 during that battle, one of the Korean War’s defining and most deadly conflicts, fought in sub-zero conditions against overwhelming odds. He was declared dead in 1953.

A sergeant near Storms on the icy hill where he was shot in December 1950 reported that the last words he heard from Storms were, “I have fought a good fight; you kids go over the hill and knock out the roadblock. I’ll go back down and get the rest of them.”

Storms, who had also served in World War II, left a wife and four sons — one born two months after he was lost in battle. Only the oldest son, Sam, has clear memories of their father, but all have kept his legacy close, learning about his history.

Each gave a son the middle name Harvey, a tradition that has continued in the family.

Grandson Michael Harvey Storms ’98 said, “The name Harvey means ‘battle-worthy.’ I think that that’s who he was.” Learning he had been identified was “overwhelmingly joyful,” he said. 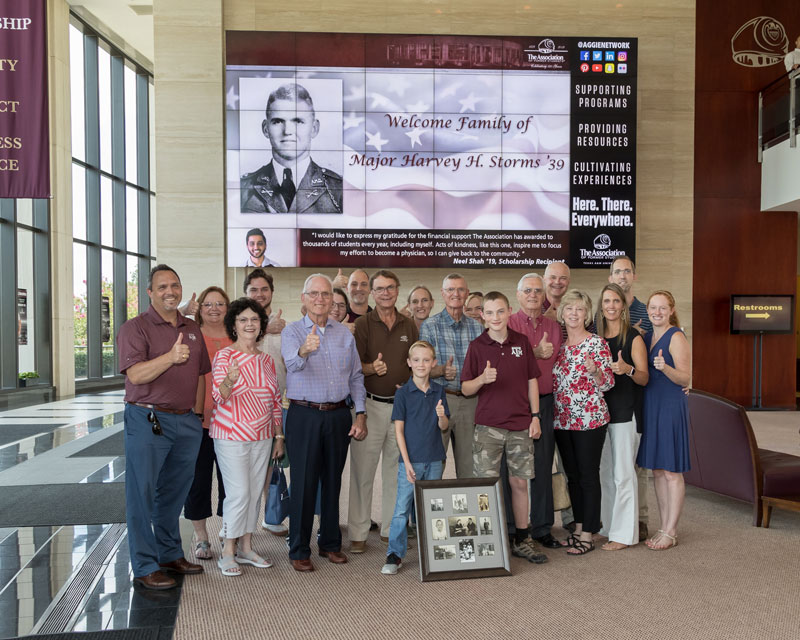 Members of the Storms family were welcomed Aug. 16, 2019, at the Clayton W. Williams, Jr. Alumni Center. Photo by Richard Badillo for The Association of Former Students

The Storms clan today includes 11 grandchildren and 25 great-grandchildren. The family is planning for an interment ceremony in June at Arlington National Cemetery.

Nineteen family members gathered Aug. 16 at The Association of Former Students and received gifts honoring Storms from leaders of The Association and the Corps of Cadets.

"Texas A&M remembering my grandfather reminds me that we are all one family," said grandson Jim Storms '94.

Association President and CEO Porter S. Garner III ’79 said, “You honor us by coming to Aggieland and letting us share in a little bit of his legacy,” as he presented Storms’ sons with coins symbolizing A&M’s core values. Corps commandant Brig. Gen. Joe Ramirez ’79 presented them with Corps of Cadets commemorative coins.

The Association also gave them flags that had been flown over the Williams Alumni Center in Storms’ honor, and after learning that Storms’ A&M yearbooks had been lost in a fire, assembled a matching set and presented those, one to each brother.

Robert Storms said his father was a “Patton Aggie” — both in the sense of the words often attributed to Gen. George S. Patton that he only needed a “handful of Texas Aggies” to win a war, and literally: “He served under Gen. Patton in North Africa and Italy in World War II after graduating from here.”

After World War II, Sam Storms said in a written account, their father “was a civilian for a while, but he missed the military and re-enlisted.” The family was stationed in Japan for a year before the Korean War began, and Storms volunteered to go to Korea.

“The last time I saw my father was on a train platform in Tokyo in August 1950 as a 9-year-old boy,” he wrote.

During the Aug. 16 visit to Texas A&M, Sam Storms said, “The mantra was ‘The troops will be home for Christmas,’” but his father wrote a letter home in early fall of 1950 to say he’d be home by May at the earliest. 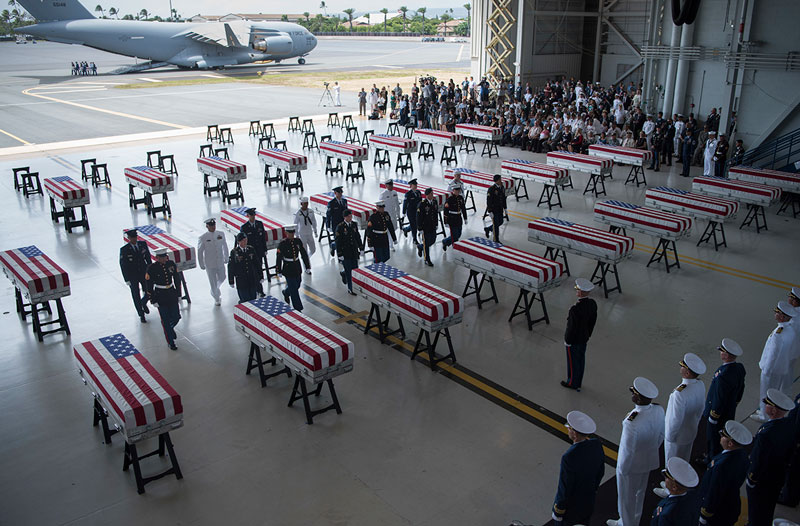 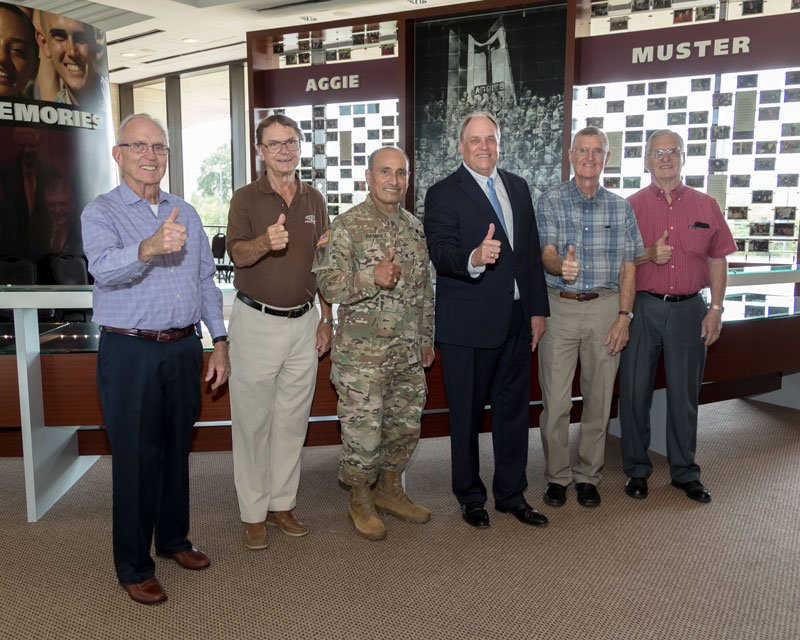 At the time of his death, Storms was serving as acting commander of 3rd Battalion, 31st Infantry Regiment.

“It was him who got most of us out, even tho he didn’t make it himself,” Sgt. Bill Rowlands wrote in his account of Storms’ last actions.

“He must have had about ten or twelve bullet holes through his field jacket… Could not see any blood anywhere due to extreme cold.” The temperature was “twenty or thirty below,” Rowlands wrote.

“The last time I saw Major Storms he was sliding down the hillside on his rear end going after the rest of the men,” he said.

“If there was ever a man who deserved the Medal of Honor, it was him.”

Overall, of the 1,900 Aggies who served in Korea, 62 were killed in combat or war-related accidents.

[UPDATE, Sept. 26, 2019: The following paragraph has been edited to reflect information received after original publication: Remains for Cecil E. Newman Jr. ’46 were returned in 1950, and he received a full military funeral in Cuero.]

A list of all 95 Aggies known to have died in military service during the Korean War period will appear in Col. James Woodall ’50’s upcoming book "The Book of Aggie Lists: Texas A&M University’s Military Heritage," in production at the Texas A&M University Press.

Your donations allow The Association of Former Students to report and share Texas A&M-related news with thousands of Aggies. Thank you! You can make a gift of any amount at tx.ag/give.