The Association of Former Students was proud to charter its 11th Constituent Network Friday, recognizing all Texas A&M students who were involved in student government on campus.

This new Constituent Network will serve as a way for former students to stay connected to each other and Texas A&M once they’ve graduated, Network President Spencer Davis ’17 said.

“We’re organizing Aggies that shared a unique leadership experience in their time on campus,” said Davis, who was an executive officer in the Student Government Association as well as vice president of Municipal Affairs and director of Gig the Vote. “SGA is so much more than just elections, and includes diverse organizations like Carpool, Big Event, and many others. What connects all of them though is the development of the Aggie core values through service. Alumni that spent their time on campus with SGA have so much to still give and we’re just making the forum for that.”

A few other groups that are included are Aggie Muster Committee, Career Closet, which The Association supports, 12th Can, Parents' Weekend Committee and many more.

Established in conjunction with The Office of Student Affairs, the Network’s goals include “career­building, community-building, and fundraising for The Association and SGA,” according to its mission statement.

“The three priorities are community-building, career advancement, and giving back to the university,” Davis said. “We want it to be both a social and service outlet just like SGA, so we’ll focus first on creating meetups across the nation. Our hope is to one day set up scholarships for students in SGA and fundraise for The Association.”

Kellie Malone ’08, Association manager of campus programs and liaison to this Network, said more than 12,500 former students fall under this Network’s umbrella. She said Constituent Networks are just another avenue for Aggies to stay involved. 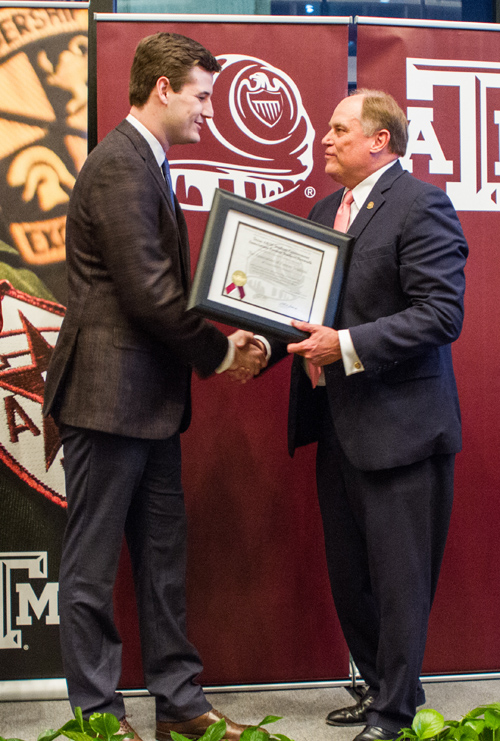 “As an alumni group we’d had Class and Club but as the university and population grew, (some) weren’t necessarily connected by location or Class year; they identified through their college or specific programs and the Constituent Network was the answer so they could stay involved,” she said of The Association’s effort to engage more former students.

“This is connecting what former students are doing back to current students and informing former students what is happening on campus as well as a huge networking opportunity,” she said of the newest Network.

Josh Reinbolt ’99, director of Former Student Programs, said The Association always looks for long-term viability when it considers chartering a Network and is excited for that this new organization will do in the future.

“We hope this will be a bridge for these students who are involved in these tradition-based student organizations to stay connected with the university once they graduate and to connect with those who have already graduated," he said.

The Association organizes and facilitates a bevy of events and programs for former students to keep Aggies engaged after they've graduated, including Class programs, Reunions, Clubs and Constituent Networks. This is only possible with the support of the Aggie Network. Visit tx.ag/give to make a gift.