UPDATE: Read the Battalion's report on Gabor's presentation, which was Wednesday night, here: "Holocaust survivor welcomed back to A&M"

Tomorrow night, he’ll speak in Rudder Theatre about his experience as a Holocaust survivor, but today Tom Gabor '61 got to take in the sights around campus -- his first visit back in more than 55 years.

“I’ve traveled all over the world … I never find more personable and friendly people than down here,” the same as when he was a student, he said.

After living through the Holocaust in the ghetto of Budapest, Gabor fled in 1956 to the U.S. as a refugee from the Hungarian Revolution.

A Texas A&M Hillel scholarship brought him to Texas A&M. He had begun his studies at the University of Budapest, but now faced taking organic chemistry and the like in a foreign language: English.

“If I hadn’t had the help -- the incredible faculty,” he said. An English professor tutored him in the language for free. “My classmates, everybody was so helpful,” he said.

He speaks of A&M so warmly that, a few years ago, his words motivated a high school junior from Atlanta to reconsider his college plans. Josh Williams '19, now an Aggie sophomore, met Gabor on a March of the Living trip -- two-week journeys that bring Jewish teenagers to Poland and Israel to study and remember the Holocaust. 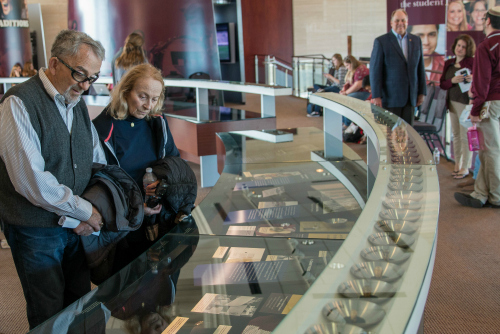 Williams thought he’d give Texas A&M a try after hearing Gabor talk about those who helped him -- he visited the campus and was immediately drawn by A&M and its traditions. Today, he’s been accompanying Gabor and his wife, Danielle Gabor, around campus, along with Rabbi Matt Rosenberg of Texas A&M Hillel, which brought Gabor to A&M all those years ago and is hosting his presentation, which is free and open to the public (details: https://www.facebook.com/events/1195730463813314/). 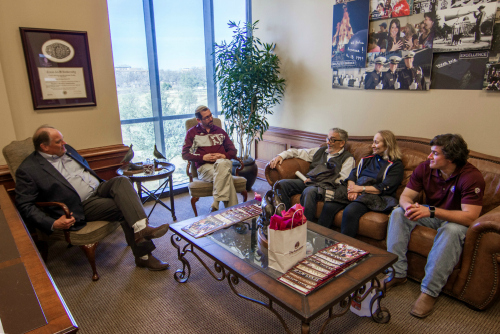 Garner, Rosenberg, the Gabors and Williams chatted for a while.

“I feel totally lost” on today’s campus, Gabor said with a laugh. A few buildings looked familiar, including his old dorm and Sbisa Dining Hall. The changes to Kyle Field were also impressive to Gabor, who was a big football fan as a student.

In the afternoon, the group came by the Clayton Williams, Jr. Alumni Center and visited with Association of Former Students President and CEO Porter S. Garner III '79. Gabor is a longtime member of The Association’s Century Club, and so even though he and Danielle live in Florida now, they have been contributing for more than 18 years to Aggie scholarships, traditions, services for former students and more.

In between reminiscing about sports and campus life, Gabor spoke a little about his Holocaust experiences and what tomorrow’s presentation in Rudder will be like. “It’s not really a speech; it’s my story,” he said.

Garner took the opportunity to present a small but rare gift, created as a recognition for Aggies who live and reflect the core values of Texas A&M: a core values coin, bearing emblems of A&M and The Association. “It’s an honor to give it to you,” Garner said. 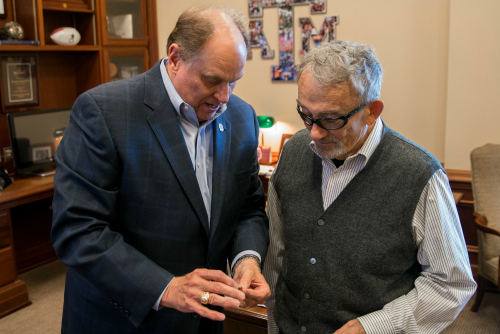