A Google search for an Aggie belt buckle led a former student to the find of a lifetime: a Class of 1890 Aggie Ring that is among the oldest Aggie Rings known to exist. Thanks to his generosity, it will be displayed at The Association of Former Students, which also helped identify its original owner.

Ross Durr '08 of Tyler, an ex-cadet out of Company E-2, is fond of a particular Texas A&M logo that features an intertwined A, M, and C (sometimes referred to as the spider logo).

One night, he was poking around the internet in search of a belt buckle that incorporated that logo. He used Google's reverse image search to find products with similar logos, and one of the hits that popped up was not of a belt buckle, but of a ring that was for sale on Etsy, an online crafts and vintage goods marketplace. 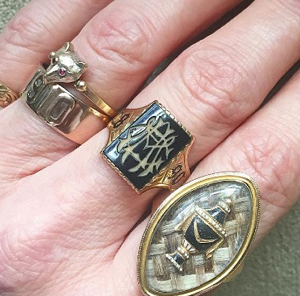 "I thought, 'Man, that's interesting,'" Ross said. "They had a lot of good pictures of it and I found the engraving on the inside, the best I could read it. So I went to The Association's website and did a name search and was able to find a hit. I couldn't sleep the whole first night after that."

In the middle of the night, he woke up his wife, Lindsay Durr '08, to show her what he had found.

"Ross said, 'I think I found one of the oldest Aggie Rings,' and he said he was thinking about buying it," Lindsay said. "And I came home from work the next day and he said, 'Well, I bought it.'"

Ross said he hadn't purchased it the first night because he wanted to do additional research. "But then I thought it had sold at one point and my heart just sank," he said. "Then when I realized it hadn't, I bought it immediately." The moment it was delivered, he took off work and drove from Tyler to College Station. 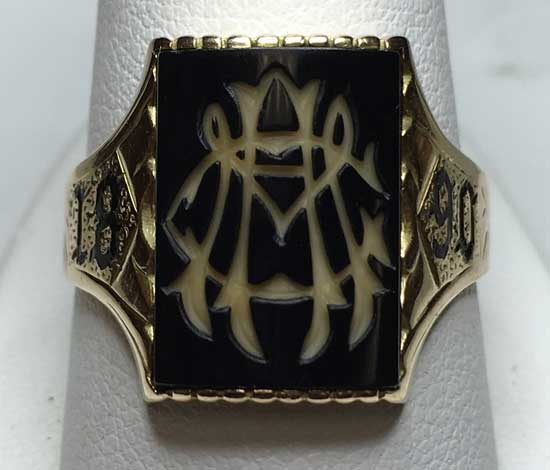 At the Clayton W. Williams, Jr. Alumni Center, he showed the Ring to staff from The Association and to university archivist Greg Bailey. All thought the Ring seemed legitimate and all were astonished at how well its original condition had been preserved.

Durr later arranged to have the Ring examined by jewelers at Balfour. They concluded the Ring's manufacturing techniques and materials were all appropriate for the period and that there was no evidence it was a forgery. Balfour’s analysis concluded that the materials are gold and a stone—probably onyx or agate—with its top surface dyed black. The monogram was carved, most likely by hand, to reveal the lighter color of stone below.

"The ring is in beautiful condition," wrote Michael Goodwin '85, Balfour's director of engineering. "I would like to extend my personal congratulations to Ross Durr ’08 on such a unique and wonderful find!" 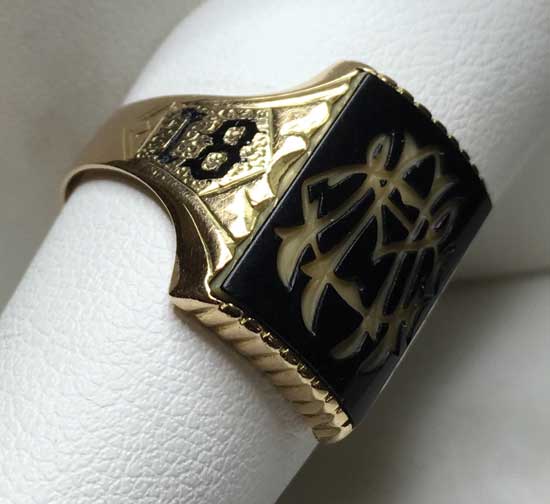 On Oct. 29, in a ceremony at the Williams Alumni Center, the Durrs presented the 1890 Ring on permanent loan to become part of The Association's Aggie Ring collections.

"That was the purpose," Ross said. "Right when I saw it, I thought, I've got to get it and return it to Aggieland for all Aggies to see. I'm glad I was able to bring it back to Aggieland."

Lindsay agreed. "It is just such a special piece of history, and it belongs at The Association." 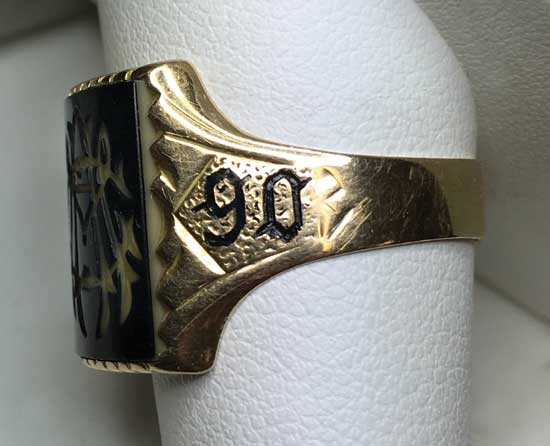 Porter S. Garner III '79, President and CEO of The Assocation, said the Durrs' generosity continues the tradition of Aggies who give back to Texas A&M. "The great legacy of The Association is the many former students who make up the Aggie Network, and what you have done adds to this great legacy," he told them at the ceremony. "We're thrilled to have the oldest Aggie Ring in our collection thanks to both of you. This adds to our collection significantly." 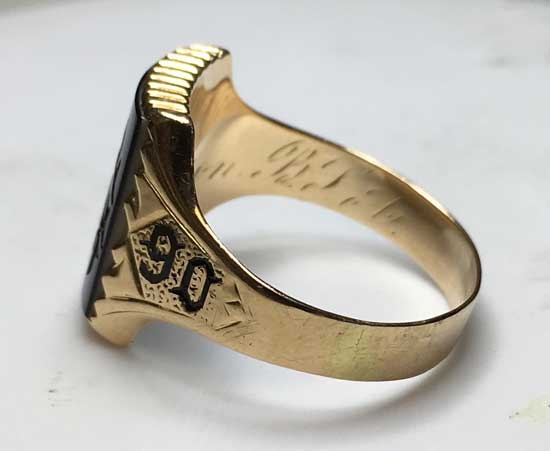 The Association's research and university archivist Greg Bailey have confirmed that the name engraved in the 1890 Aggie Ring matches that of a former student in The Association's and the university's records. William Dilworth Anderson, born in Gonzales, Texas, in 1871, was reported to have declined an appointment to West Point to stay closer to home and support his family. He enrolled at the A&M College of Texas in 1887, was a sergeant in the Corps of Cadets his second year, and was a captain his third year. He completed a three-year degree program and graduated in 1890, at the age of 19, with a bachelor’s degree in "scientific agriculture."

After college, Anderson made his home in Waxhachie, Texas. While serving as president of the school board there, he courted and then married a local high school teacher, Katherine Cary "Katie" Watts. The oldest living Aggie, Col. Tom C. "Ike" Morris '33, recalls being a high school student in Waxahachie at that time; in fact, "Katie" Watts was his typing teacher. He remembers the Andersons as "a great couple" who were "outstanding citizens."  The Andersons later lived in a home four houses away from Morris on West Main street in Waxahachie; Morris remembers it as "a very beautiful home I wished I could have owned!"

A Class of 1891 Ring is in a collection at the Sanders Corps of Cadets Center; The Association also has a replica of that 1891 Ring in its collections.

The 1889 and 1891 Rings have plainer designs and show far more wear than the 1890 Ring that Ross Durr found. (Aggie Ring designs varied by Class and by jeweler until 1933, when an official Senior Ring Committee was appointed to oversee the design and control manufacturing and distribution.) 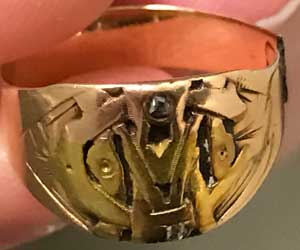 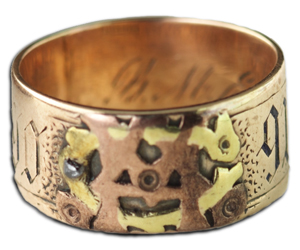 The Class of 1889 Aggie Ring at left, known as the Middlebook Ring, is at the Cushing Archive. A second 1889 Ring, the Montgomery Ring, is known to exist, though its whereabouts are uncertain. The Class of 1891 Aggie Ring at right is in a collection at the Sanders Corps Center; The Association has a replica of it.

The Association has five separate collections of Aggie Rings on display at the Williams Alumni Center. The Josh Sterns '99 Collection and Memorial Ring Collection, with one Ring representing each Class, are displayed together on the Neely Mezzanine and serve as a lasting memorial in celebration of the Ring owners’ lives and as a tribute to all the members of each represented Class. The 1890 Ring will be displayed along with these collections. 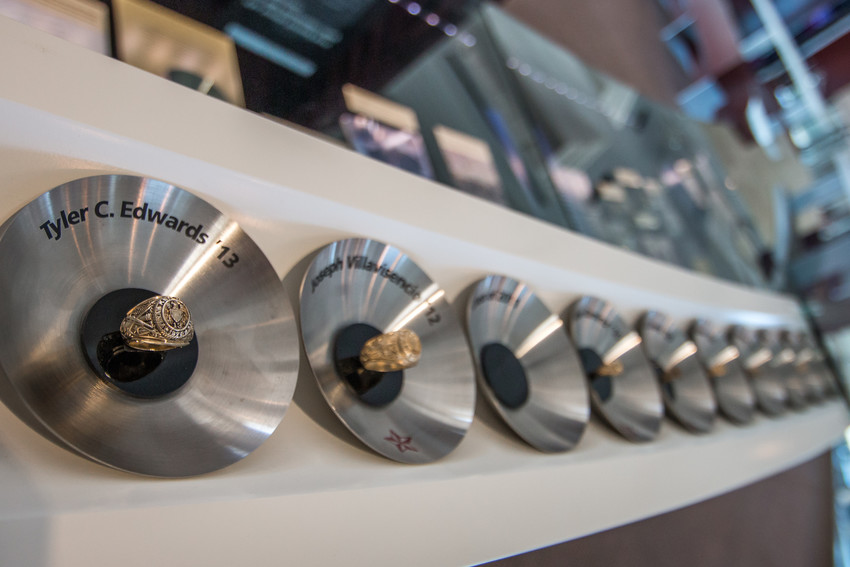 A small part of the Sterns and Memorial collections, which are displayed together.

The Rings of Special Significance collection includes notable Rings or the Rings of notable Aggies, such as those worn by James Earl Rudder ’32 and Ormond R. Simpson ’36. 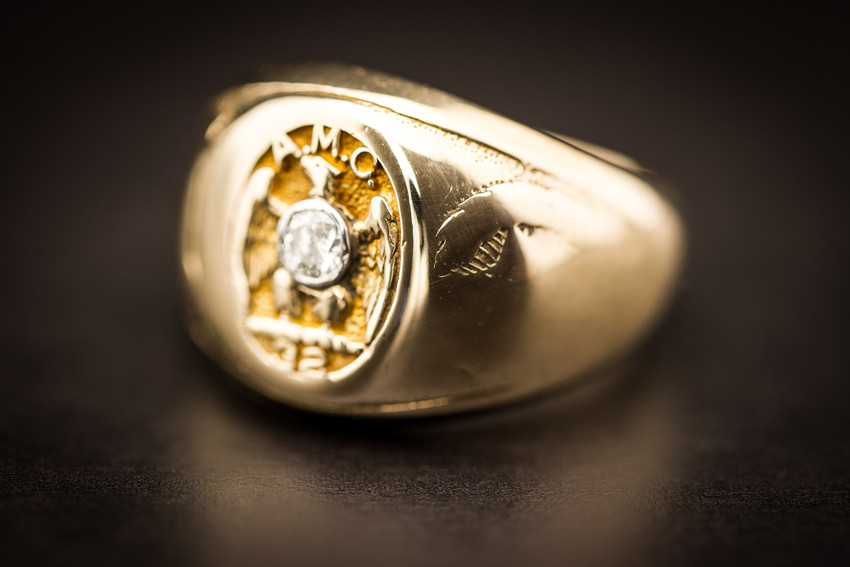 The Aggie Ring of James Earl Rudder '32 is part of the Rings of Special Significance collection.

The Polly Wiseman Franklin ’86 Ring Collection showcases various Aggie Rings on a rotation of about three months in the Aggie Ring Office. The collection was established in 2003 by Patricia and Charles Wiseman ’57 in honor of their daughter. 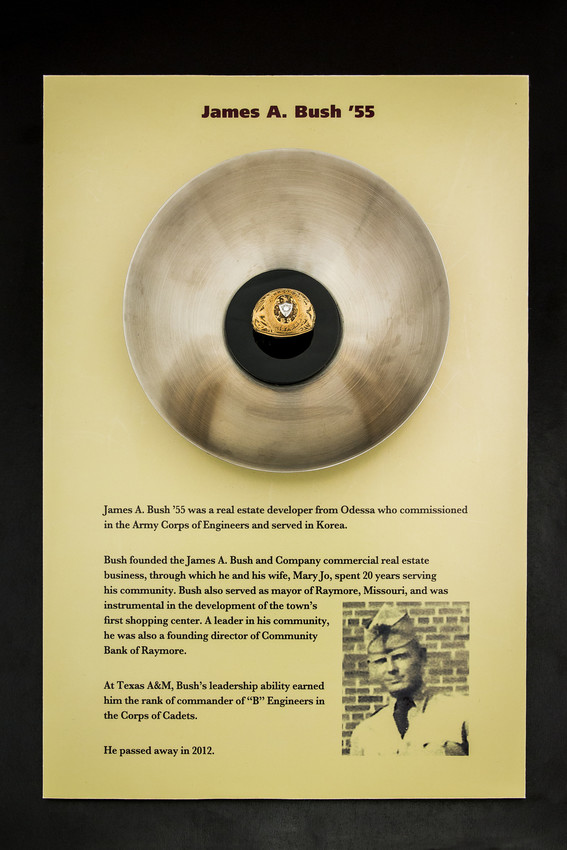 One of the Rings from the Polly Wiseman Franklin ’86 Ring Collection. 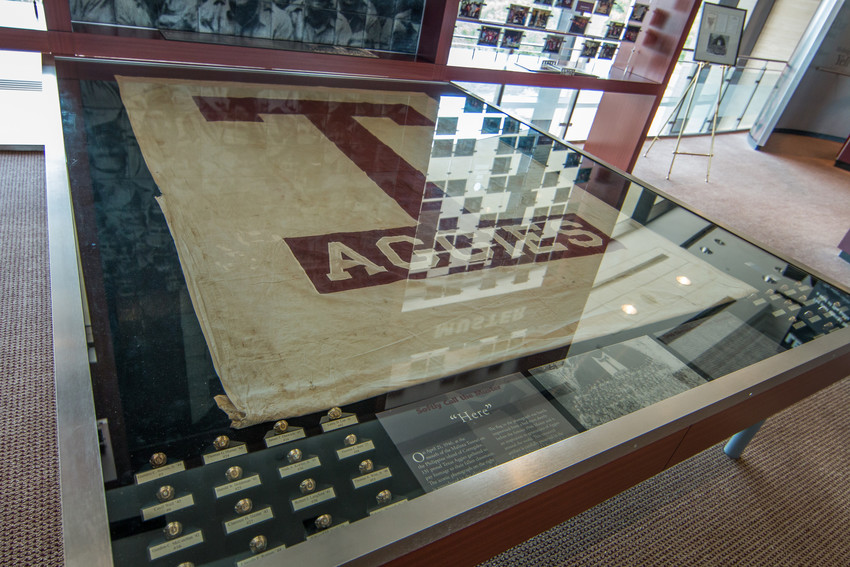 You can view all of The Association’s collections by visiting the Clayton W. Williams, Jr. Alumni Center. The Williams Alumni Center is open Monday through Friday, 7:30 a.m. to 5:30 p.m., and Saturdays from 10 a.m. to 2 p.m. For holiday and Game Day hours of operation, call 979-845-7514 or visit AggieNetwork.com.

In 2014, as part of the 125th anniversary of the Aggie Ring, The Association published a story highlighting the evolution of the Aggie Ring's design over the years: "Symbols of History, Engraved in Gold" (pdf).

We also began collecting and aggregating stories about the most visible symbol of the worldwide Aggie Network; you can read those at tx.ag/AggieRing125th.

Earlier this year, Jack Leonard '52, a retired Dallas dentist, donated to The Association's collections a Class of 1898 Aggie Ring that had belonged to W.E. Crow. Read that story and see photos of that 1898 Ring at tx.ag/1898Ring.