An Aggie who is also an Aggie mom honored her late son by working to bring a collegiate addiction recovery program to Texas A&M and establishing a scholarship in his name.

"A collegiate recovery community is not rehab; it's for kids who have already been through rehab," said Angie Rogers '84. "It is a community of young people whose college careers have been derailed because of substance abuse and who want to get their lives back."

Rogers' son, Brandon Rogers, died of an overdose in November 2015, so the cause is very personal for her, but "everybody knows somebody" who has struggled with addiction, Rogers said. "Did you know that 18 percent of the A&M student body would meet the criteria as substance abusers? That’s why I am so vocal about it. Kids are dying every day, not just in Dallas but in College Station, too. We have to stop the silence."

Less than a year after her son’s death and just months after she rappelled off Reunion Tower in Dallas to bring attention to the cause, the new Aggie Recovery Community was up and running for the fall 2016 semester. At the same time, the first award from the Brandon Rogers Memorial Scholarship Fund went to the ARC. 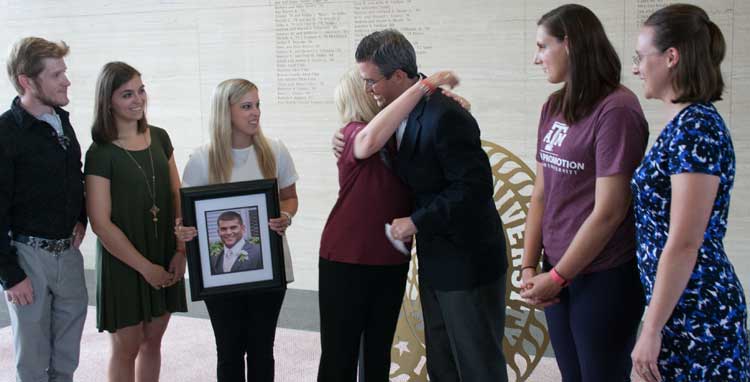 Nic Taunton '07, vice president of The Association of Former Students, accepts a check and a hug from Angie Rogers '84 to fund the Brandon Rogers Memorial Scholarship Fund. Rogers endowed the fund to honor her late son, Brandon, and as part of her work to help create an addiction recovery community for students at Texas A&M.

"Caitlin Farr [health promotion specialist in A&M’s Offices of the Dean of Student Life] and her team are doing a great job getting this new program established," Rogers said. "The hardest place to stay sober is a college campus. You need a sober community, because you can’t necessarily go back to hanging with your friends if they aren't sober. It's such a fragile time, and so easy to go back to what you know. So it's a place to continue recovery, a place with support to help them stay clean."

Rogers, a College of Veterinary Medicine graduate and Aggie mom to Blair Rogers ’13, said Blair’s twin brother Brandon always wanted to be an Aggie, too, and he had planned to transfer to A&M after attending Blinn College.

“He went to Blinn for three semesters, but his struggle with substance use disorder became clear at Christmas of his sophomore year, and he went into rehab. He had multiple trips to rehab. Then I attended the North Texas Recovery Conference in September 2015 and learned about collegiate recovery programs and how important they are to a college student in recovery. So my goal was to get a collegiate recovery program at Texas A&M.

"I felt like that was a missing piece in Brandon’s journey: a peer community that provided a supportive and fun environment for students in recovery from substance use disorders and other addictive behaviors, apart from the culture of drinking and drug use that is present on most college campuses.” 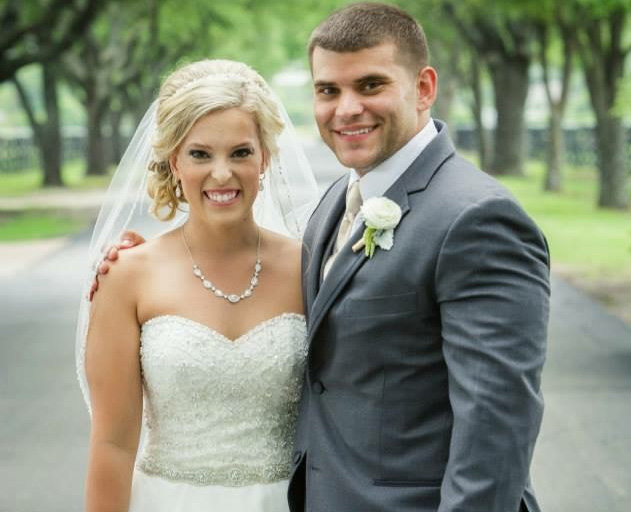 Brandon Rogers with his twin sister, Blair Rogers '13, at her wedding in June 2015.

Brandon Rogers never got the chance to attend A&M; on Nov. 3, 2015, he died of a heroin overdose. “Our family was forever shattered with broken hearts that will never heal,” Angie Rogers said. “I don’t think there can be any greater pain. I cry every day, but I don’t want the pain to be wasted. We found purpose by establishing the Brandon Rogers Memorial Fund through The Association of Former Students, and our plan for this fund was that a scholarship be given to a student in recovery. But the problem was that TAMU did not have a recovery program, and they had no way to identify those students.”

Even before Brandon’s death, Rogers had already been talking to A&M officials about the need for a campus recovery program, but after his death, “Getting a CRP at TAMU became my passion,” she said. “Seeing that the pain is not wasted, that there is good coming out of it, it helps. It helps my grief to be able to funnel it into doing something good. And getting this recovery community in place and getting the scholarship fund endowed was the goal, so we could help another student.”

Angie describes herself as "not athletic, completely out of shape, and scared to death of heights," so rappelling from a 561-foot-tall tower last year was both a mental and physical challenge. "I don't even like roller coasters, but my son was in recovery for many years, and recovery is really, really hard. If he can do that, I can go down the side of a building." 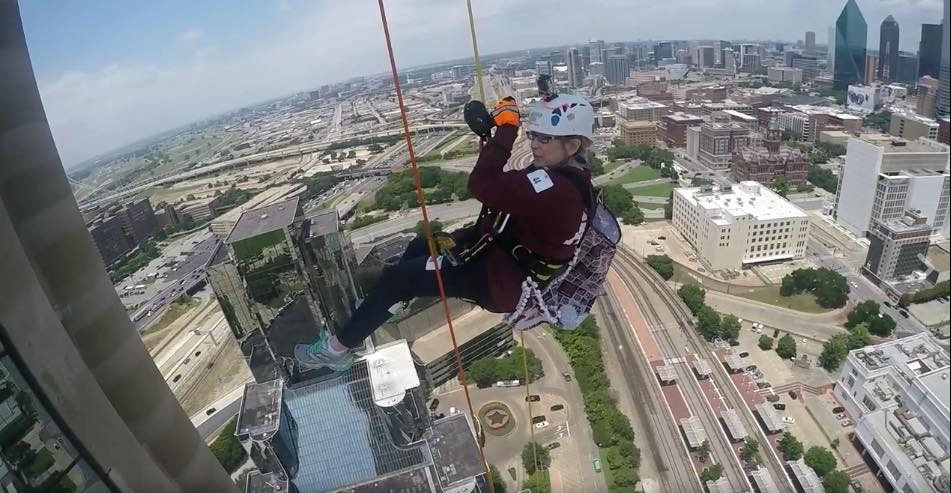 Angie Rogers dangles from Reunion Tower in Dallas during the Shatterproof Rappel Challenge as part of her mission to raise awareness about addiction.

The notion of rappelling from Reunion Tower was planted on Mother’s Day of 2016. “I was really, really sad,” she said. “My daughter was not there, my husband was at work, so I was by myself. The hardest thing I ever had to do was give one of my children back to God, and that was my first Mother’s Day without my son, and it was hard. Part of my heart was missing.”

She learned of the upcoming rappel event at the iconic Reunion Tower that was being organized by Shatterproof, a national nonprofit organization committed to fighting addiction to drugs and alcohol and ending the stigma and suffering of those affected by this disease. The Shatterproof Rappel Challenge was intended to raise awareness and help change the conversation about addiction.

“I wanted someone to rappel in honor of my son, and I saw that Brian Cuban was going to rappel. I knew he had had hip replacement a year before, and I thought that if he could do it, maybe I could do it.”

Cuban is a lawyer, author and activist; Rogers knew him because she had previously invited him to speak at a meeting of the Collin County Aggie Moms. Cuban is the author of "Shattered Image: My Triumph Over Body Dysmorphic Disorder," which chronicles his experience and recovery from years of eating disorders, alcoholism, substance use disorder, and body dysmorphic disorder.

“I wanted to bring awareness to other moms,” Rogers said. “Usually at our Aggie moms’ meetings, we talk about all the good things at A&M, and we rarely talk about issues like these. I wanted to bring that to my club, so I invited Brian to come speak. He agreed and shared his powerful story of recovery. I had that relationship with him, so when I decided to rappel, I contacted him. 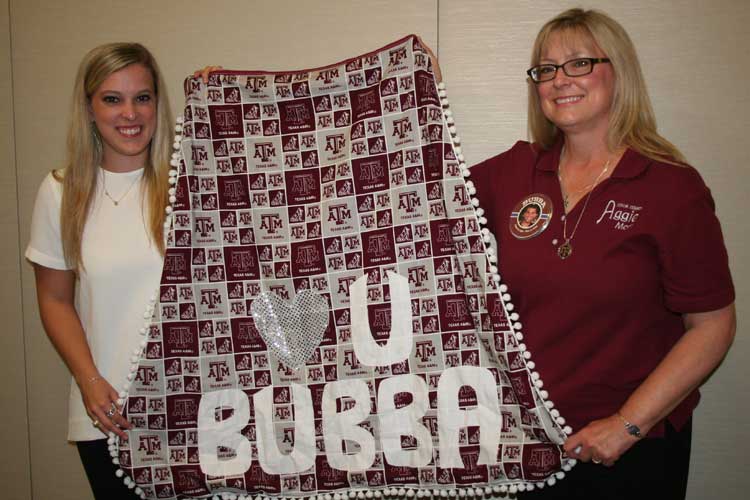 Angie Rogers wore this Aggie-themed cape when she rappelled off Reunion Tower in Dallas. "Bubba" was the family nickname for her son, Brandon, who died in November 2015.

Rogers described her rappel experience as “pretty darn scary” but worth the struggle: “I am so thankful I did it. It’s something I never would have done, but I had a higher calling to do it in memory of my boy. I think Brandon would have been shocked, but he would have been proud, too. It was a great experience. I had to do it for Bubba.”

She said she could not have done it without the support of her fellow Aggies. “My Aggie network, particularly the Aggie moms, were there to support me. They were just a great pillar of support through this whole deal. I never dreamed when I joined the Aggie moms in 2009 that I would have this support community from all over the state, not just Collin County. I could never have done this without the Aggie Network, and without The Association of Former Students, too. If I didn’t know Barbara Kasper ’82 [a former Association vice president], I would not have even known to call y’all and say I want to start a scholarship fund. I couldn’t have done it without you guys.”

She said her goal now is for A&M's new Aggie Recovery Community to be visible on the campus.

"I want people to talk about substance abuse disorder,” she said. “I want it to not be hidden. I’d like to see it get support from the Aggie Network and get support on campus. These students struggle, and they need a community, and they need peer support. That is what college recovery programs are all about. This has been needed on this campus for a long time and to finally get it, it makes my heart swell.

“These recovery communities give hope. It gives my heart hope, it gives other parents like me hope. There are a lot of Brandons out there. It’s too late for my son, but it’s not too late for another student.”