A rare Class of 1898 Aggie Ring was recently donated to The Association by a Dallas-area Aggie who acquired it and wanted to share it with the Aggie Network.

Jack Leonard '52, a retired Dallas dentist, donated the Class of 1898 Aggie Ring that had belonged to W.E. Crow. Texas A&M University Archivist Greg Bailey said Crow is listed in an early A&M publication called “The Bulletin” for the academic years 1896-97 and 1897-98 as a horticulture major from Cisco. He is then listed in the 1898-99 edition as an alumnus with a horticulture degree who continued on to study medicine in New Orleans.

Crow, who served in World War I and became a prominent physician in Dallas, never had children. When he died, his Aggie Ring passed to his secretary. She knew its significance and thought it should be in the hands of one of Crow's fellow Aggies, so she passed it to Leonard, who received a bachelor's in biology from A&M and went on to become a dental surgeon in Dallas. Leonard is also an Aggie dad; among his four children is Tim Leonard ,'84, who received a degree in petroleum engineering.

Crow's Ring is in remarkably good condition for its age, with the inscription of his name inside the band still perfectly clear. Thanks to Leonard's generosity, Crow's Ring is now part of the Polly Wiseman Franklin '86 Ring Collection, where it can be enjoyed by visitors to the Clayton W. Williams, Jr. Alumni Center. 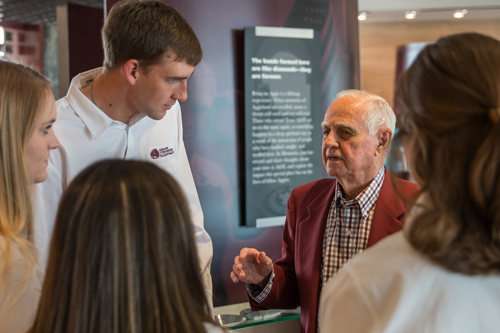 Jack Leonard '52 talks to members of the Aggie Network Student Ambassadors about his memories of Texas A&M and the 1898 Aggie Ring he donated to The Association.

For more information about the history of the Ring and the evolution of its design, check out this story from Texas Aggie magazine: Symbols of History, Engraved in Gold.