Find Pushes Century Tree’s Planting Back To 125 Years Ago

Move the slider in the image below to swipe between a photo from 1917 and one from 2016.

A 1917 panorama pairs with a 2016 picture that Association photographer Patrick Danielczyk ’03 took to match it from the top of the YMCA. The historical view, from A&M’s archives, includes the Corps of Cadets in formation across a still-unpaved Academic Plaza.

A researcher’s find in Texas A&M’s libraries could finally determine the age of a much-loved campus symbol.

Though Aggies began calling it "the Century Tree" or "Century Oak" as far back as the 1970s, until recently the best estimate for the iconic live oak was that it had been planted around 1900 or later.

But a likely planting date of 1891 means the Century Tree has its 125th anniversary this year—only 15 years younger than Texas A&M itself.

It would have taken root as a year-old sapling on campus the same year Sul Ross became A&M’s president. It grew near the original Old Main building—but not too near, since it survived the burning of Old Main in 1912—and presided over the construction of the Academic Building, which notched 100 years in 2014.

The Century Tree would have been nearly three decades old when its neighbor "Sully," the statue of Ross, was dedicated in 1918.

It has stood for every single Silver Taps since the tradition moved permanently to the Academic Plaza, also in 1918. A latent memory for thousands of Aggies is the rush of wings when birds take flight from oak branches at the boom of the Ross Volunteers’ first rifle volley.

Hundreds or even thousands of Aggies have gotten engaged under its boughs, estimated Andy Duffie ’78, who in 2010 began gathering Century Tree acorns and nurturing them into saplings that he sells to raise A&M scholarship funds; the trees are popular wedding, baby, birthday and graduation gifts. (Share your Century Tree photos with us on social media with hashtag #CenturyTree125 or at AggieNetwork@AggieNetwork.com.)

The "Century" label wasn’t universal yet in 1976, when the centennial Aggieland yearbook records Roger Clayton ’79 saying, "My favorite spot is the bench under that big tree in front of Bolton Hall. Amidst all the modern buildings and construction, there is a place of natural beauty where you can relax, enjoy life, or study."

Clayton recalled that he used to walk out of his way between classes to pass by the tree. Years later, he said, "My now son-in-law proposed to my daughter on that spot." 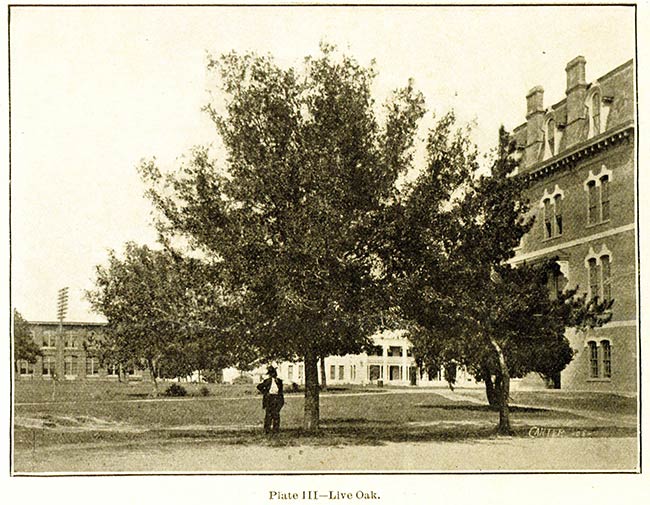 A notable live oak is pictured near Old Main in a June 1908 bulletin put out by the Texas Agricultural Experiment Stations.

More than a century ago on A&M’s campus, one particular oak already stood out.

"One of our specimens (Plate III), planted in 1891, and standing on the hard-tramped parade ground, has in sixteen years advanced from a sapling 18 inches in height to a tree reaching 28 feet in height, while the spread of its crown is 26 feet in diameter, and the diameter of the trunk, one foot from the ground, is nearly one foot. Other specimens planted later are as tall, but have not yet attained that bulk."

Gretchen Riley ’00 of the Texas A&M Forest Service measured the Century Tree last week and said it now stands 45 feet high, with a trunk nearly 11 feet around (131 inches) and a crown spread (the average diameter of how far its branches reach) of 101 feet.

Incidentally, that’s not nearly enough to make it the biggest live oak in Texas, a title held by a 67-foot-high Brazoria County tree (which knocked off Rockport’s "Big Tree" in 2003). But the Century Tree was added in 2011 to the Texas A&M Forest Service's "Famous Trees of Texas" registry.

The live oak in the 1908 photo stands in the correct area and is old enough to have developed into today’s Century Tree. It’s pictured near the northwest corner of Old Main, said university archivist Greg Bailey. The Academic replaced that building but does not have the exact same footprint, Bailey said.

When the picture was taken, the Century Tree should have been already standing there or nearby, based on previous estimates of its age.

Photos taken several years later show the parade ground and a tree that is more definitely identifiable as the Century Tree.

A 1917 panoramic view (at top) shows the Corps of Cadets in formation across a still-unpaved Academic Plaza. Paired with a 2016 picture taken by Association photographer Patrick Danielczyk ’03 from the top of the YMCA, it shows a large tree that’s the right size and in the right position to be the Century Tree.

Clearer still is a 1920 photo in which the trunk’s branching patterns match up with today’s Century Tree (below). 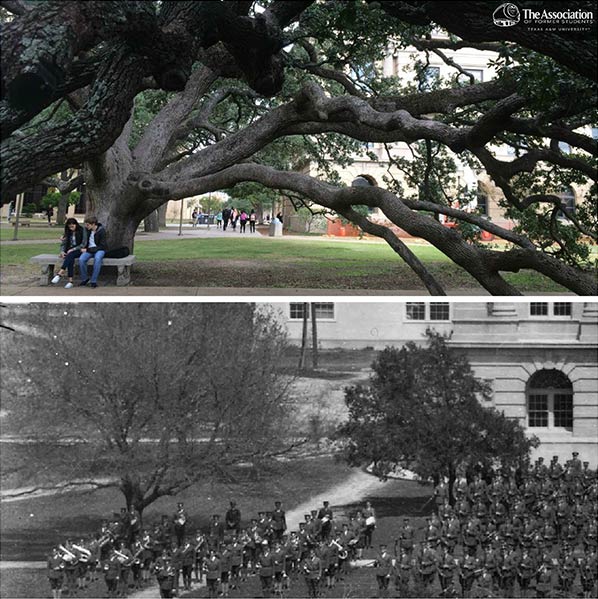 So is the 1908 tree the same as the 1920 tree? It’s a good candidate, according to Riley, the Texas A&M Forest Service's staff forester.

Students with the Traditions Council added the 1891 planting date to their "Trees on Campus Trivia Tidbits" last year and have shared it on social media with other Aggie history.

The future looks promising for the Century Tree.

Stephen Johnson, who’s in charge of the SCC Service Solutions arborist team of six that takes care of 10,000 trees on A&M properties, said the Century Tree is healthy and gets similar care to the other trees. Sometimes they prune a little deadwood, he said, and a few weeks ago the soil around it was treated with organic fertilizer after testing showed the soil was lacking a little nitrogen.

Though oak wilt disease affected trees near the Evans library about eight to 10 years ago, Johnson said, those diseased trees and roots were removed. With luck, oak wilt won’t return; he said he’s seen no sign of it in the three years he’s been grounds manager for arboriculture and horticulture.

More good signs: There’s not a lot of foot traffic to compact the soil around the Century Tree, which would make it harder for air and water to reach the roots. "And it’s got plenty of grass around for the roots to still get oxygen," Johnson said.

Construction work is another soil compactor, Johnson said. So the Century Tree may be lucky to have weathered the Academic Building going up beside it. 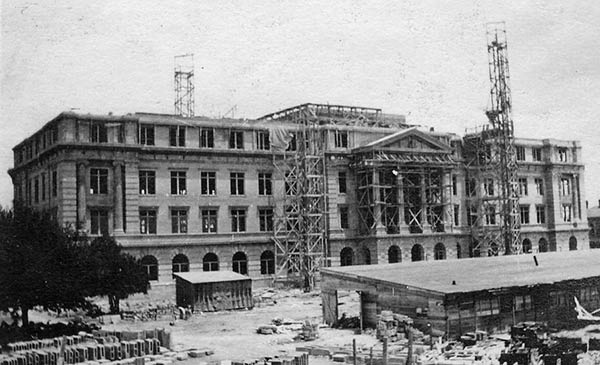 The Academic Building was completed in 1914; the Century Tree is at left. Photo courtesy Texas A&M Cushing Archives

Saplings from Duffie’s Aggie Century Tree Project (more information: www.aggiecenturytreeproject.com) have been planted across Texas and in 14 states from coast to coast; they are best suited to a warm climate.

Sayings arose, perhaps in the 2000s, that a couple walking under the tree together would marry and walking under the tree alone doomed an Aggie to be forever alone. But the Century Tree has shared the campus with more than 99 percent of A&M students who have ever enrolled, so it’s a tree that belongs to all Aggies, and many to come.

As A&M horticulturist Helge Ness wrote in the 1908 bulletin, "From general indications, I conclude that the Live oak is the foliage tree that will attain the greatest longevity in our soil."