Texas A&M University President M. Katherine Banks delivered a state-of-the-university address to the Fort Worth A&M Club on Thursday as part of the traditional "President's Night" series of visits with the largest A&M Clubs. 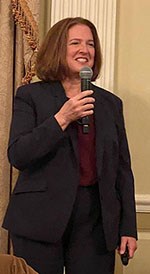 Banks spoke to a sold-out crowd of about 100 people at Colonial Country Club for "An Evening with The President: Dr. Katherine Banks." The Club described the event as a "friendly Fort Worth welcome" for A&M's 26th president, who took office in June after nine years as vice chancellor of engineering and dean of Texas A&M’s College of Engineering.

A&M Clubs are chartered by The Association of Former Students to organize former student activity in a geographical area or at a large company. The Clubs provide a forum in which former students can become active members of the Aggie Network, gain experience in leadership and organization management, and give back the university by raising scholarship funds for A&M students. A list and map of all A&M Clubs worldwide can be found at tx.ag/Clubs.

For many years, most Texas A&M presidents have visited the largest A&M Clubs in Texas annually to provide their perspective on the current and future landscape of the university. President Banks' next such appearance will be when she speaks to the Houston A&M Club on Nov. 8 at Post Oak Grill. She also is planning visits to the San Antonio and Brazos County clubs in the spring. She previously visited the Capitol City A&M Club in Austin on Sept. 9.

A&M Clubs are chartered by The Association of Former Students and supported by Association members' donations. Learn more about your local Club at tx.ag/Clubs and give back at tx.ag/Give.