Texas A&M students are leading an effort to recreate the 2001 “Red, White and Blue” game at Kyle Field in remembrance of the 9/11 attacks 20 years ago.

All fans attending the Sept. 4 football game against Kent State are asked to wear red, white or blue based on their seat section – whether it be clothing they already own or one of the T-shirts being sold at numerous outlets.

The student organizations behind the effort are Maroon Out, Traditions Council and the Student Government Association, all groups that The Association has helped support over the years. They are partnering with Texas A&M Athletics.

Celina Hernandez ’23, outreach director for Maroon Out, told WTAW, “Recreating this is just an act of patriotism for our country. We are all Americans, we all want to work together, especially after COVID.”

Twenty years ago, five Aggie students led the grassroots effort that resulted in an indelible, emotional sight just days after the 9/11 attacks: the three decks of Kyle Field shining in red, white and blue worn by thousands of Aggies as well as Oklahoma State visitors on Sept. 22, 2001. 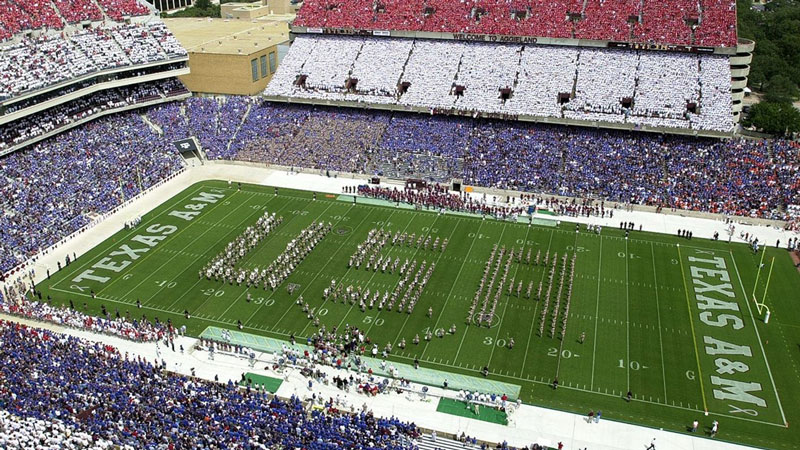 With 2021’s recreation set for A&M's first home game, the Kyle Field stands are expected to be opened to full capacity for the first time since November 2019.

Read more details of the “Standing For America” 2021 effort here. Proceeds from shirt sales will be donated to Texas A&M Task Force 1, an urban search and rescue team, and the Points of Light Foundation founded by President George H.W. Bush.

Later in the season, the Maroon Out student group will switch its focus to this year’s designated Maroon Out game, which as in 2020 will be the final home game of the year.

Your donations allow The Association of Former Students to support student organizations and to share Texas A&M-related news with thousands of Aggies. Thank you! You can make a gift of any amount at tx.ag/Give.