Muster is one of Texas A&M’s most unique and long-standing traditions. It touches the life of every Aggie, and for honored families, it gives the Aggie Network great meaning.

In 2014, Hannah Lang ’18 was a senior in high school with plans to attend Texas A&M in the fall when her mother, Sandy Heidtke ’92 passed away after battling cancer.

“I grew up in a really big Aggie family, so my first memories of Muster actually came long before my mom passed,” she said.

Lang had seen her mother honor several of her other Aggie family members who had passed throughout her childhood.

“I remember seeing my mom in her little crafting room making a Reflections Display poster for my uncle,” she said. “She told me about Muster and how it’s a way for Aggies to remember Aggies who had passed.”

At the campus Muster ceremony, the Reflections Display is set up in the Flag Room during the week of Muster. Families send in personal items that reflect their loved one’s life and what mattered most to them to be displayed as a living memorial.

After watching her mother demonstrate this labor of love for other family members, making a Reflections Display for her mom was a significant moment for Lang.

“Now I was the one making her display, and I remembered the ones she had done for my uncle and grandpa, and what that had meant to her,” she said.

Growing up in a family of Aggies, Lang had always seen the power of the Aggie Network, but got to experience it on an entirely different level when she participated in Muster that spring as an honored family member.

“I thought I knew what the Aggie Spirit was all about growing up, but just seeing Reed Arena full of people who were there to support other Aggies, my mom included, gave me a whole other perspective,” she said. 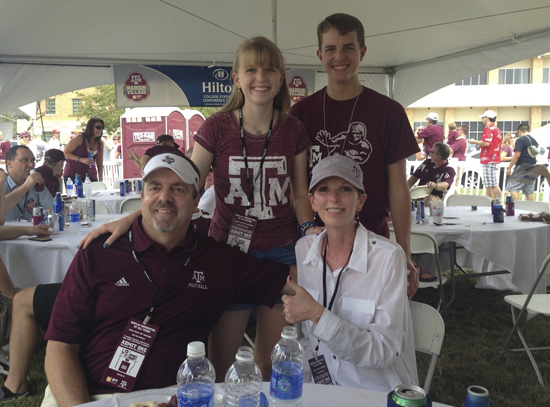 For Lang, Muster was a tangible reminder that she was not alone as she kept her mother’s memory alive.

“When you lose someone you love, there is this weight of remembering them, but when you’re at Muster, that heaviness just feels a lot lighter,” she said. “All these people are there to remember with you, so it just didn’t feel as heavy that she was gone.”

Grateful and moved by the way Aggies took care of her and her family, Lang spent the next four years involved in Muster as a student at A&M.

“I saw ways that my family and I were served and cared for at Muster, and I knew that I wanted to be a part of helping make that happen for other families like mine,” she said.

She spent one year on Muster Committee and the following years as a Muster host.

“I was excited to get involved with Muster as a student because I felt like I could empathize with the families since I had been in their shoes,” she said.

Lang recalled a moment during her time on Muster Committee when she was able to do just that with the mother of a student who had passed away.

“I was looking through the Reflections Display at the MSC the day before Muster, and saw a mom setting up pictures for her daughter, and I wanted to go talk to her,” she said. “I went up to her, and we talked for a long time about all the things her daughter loved -- and I told her that my mom had passed away too.”

Lang recognized that she was in a unique position to really support Aggies, like this mom, who had lost people they loved.

“It’s little things like those conversations where I felt like I had an opportunity to see someone grieving and be there for them,” she said. “I got to tell them, ‘I see you and I know this is hard but you’re not alone.’” 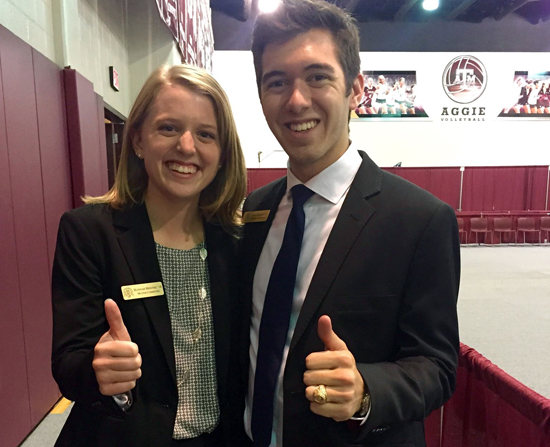 Now, Lang is on the communications team at The Association of Former Students, where she continues to support the families of Aggies who have passed. She coordinates the Silver Taps tributes in Texas Aggie magazine, honoring the lives of Aggies we have lost.

“A big part of my job is telling these families, ‘Your Aggie’s story mattered, and I want to be a part of remembering that with you.’ We do that by honoring them in the magazine as well as helping them get connected with a Muster ceremony, and so much more,” She said. “I knew that I had been served in that way when my mom passed, and I now I get to pay that forward.”

“The Association is integral in preserving, maintaining, and strengthening Aggie Muster,” Lang said. “Thanks to the structure and support provided by The Association, Muster volunteers all over the world are equipped to host Musters that reflect their communities, celebrate what it means to be an Aggie, and remember the lives of those we’ve lost.”

Thanks to The Association, Muster chairs receive access to services such as a planning guide, email services, the Speakers Bureau, Muster media assets, Muster-related trademarks, and a Roll Call for the Absent that is specific to each Muster.

Just in 2020, The Association led the creation of Muster Live, when campus Muster and the Worldwide Roll Call were unable to take place in-person. The Association made it possible for nearly 50,000 Aggies to attend Muster virtually.

The Association also provides $15,000 to the student-run campus Muster and $50,000 in support and services to local Musters.

“Our team at The Association deeply believes in the importance of Muster and works hard to ensure that this tradition remains strong year after year,” Hannah said. “At the root of it all, here at The Association we’re committed to the belief that all Aggies have a unique bond, and the life of every Aggie is worth honoring.”

The Association of Former Students is the oldest organization serving Texas A&M University in support of the ever-growing Aggie Network. We are HERE for Aggies during their days as students and former students, THERE for Aggies as they make their way around the world and EVERYWHERE the Aggie Network needs us to be. To help us help more Aggies, and support traditions like Muster, visit tx.ag/Give.