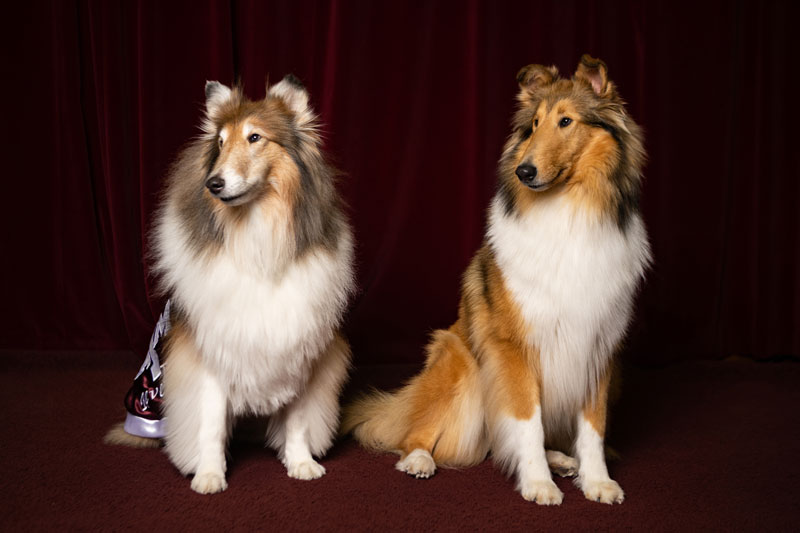 The breeders of Texas A&M University’s mascot-in-waiting handed over her leash Friday in a private handoff ceremony in the Sanders Corps of Cadets Center.

The 18-month-old collie will spend the next few months training to serve as the regal, beloved symbol of Texas A&M. She’ll spend the spring semester shadowing Reveille IX – who is now completing her sixth year in the role – learning all that’s required to meet the rigors of mascot life.

Mascot candidate Reveille X will officially assume her role in May after a process of training, searching and selection that lasted more than a year and a half. Picking the right animal to be the university’s most public embodiment was a carefully considered process, said Brig. Gen. Joe E. Ramirez, Jr., '79, commandant of the Corps of Cadets.

“Reveille is the First Lady of Aggieland. You think of A&M, and you think of Reveille,” Ramirez said. “She represents pride and tradition and all of the things we hold sacred here.”

The university first contacted breeders in September 2019 about potential successors for Reveille IX. Dr. Lori Teller, a clinical associate professor in the College of Veterinary Medicine & Biomedical Sciences, said all involved determined it best to initiate the search process while Reveille IX was still healthy but approaching retirement.

It takes a very specific kind of dog to serve as Reveille. First, she needs to have the look: an American Rough Coat Collie with sable-and-white fur. She also needs the right personality to thrive in the high-profile position: calm yet extroverted, focused, and adaptable.

The committee stayed in touch with the breeders and tracked the dogs’ progress over time. After ensuring the dogs had completed the appropriate medical examinations, committee members narrowed down the field to two finalists.

Then it was time for in-person evaluations. Teller and other members of the committee, including two former handlers, flew to Kansas and Ohio to meet the potential mascot candidates.

Mia Miller ’21 and Colton Ray ’22, two of Reveille IX’s former handlers, said their priority was finding a dog that had the right temperament. Was she overly excited when meeting people? Would she be able to pose for pictures? Did she spook easily? And could she handle working with large crowds?

Mascot candidate Reveille X of Juell Collies in Topeka, Kansas – the same breeder that donated Reveille VIII – checked all of the boxes.

Over the course of several hours, Teller observed that the mascot candidate was not timid or overly excited, and wasn’t easily distracted by loud noises – not even the banging of pots and pans. A cat that walked by was given a mere glance of interest, and she could walk through a park and interact with others without pulling or tugging on the leash.

“Her personality was just so lively,” said Miller, who in the spring of 2018 became the Corps of Cadets’ first woman to serve as Reveille’s handler. “She was excited to see us, but not overly excited. She clearly had really good manners and was able to follow all of the commands and tasks we asked of her. She has a great personality, and was friendly to anybody she met.”

This is critical, as her handlers – a sophomore is selected each year from Company E-2, the Corps outfit responsible for her care – say it’s difficult to walk with her on campus without being stopped by Aggies for a photo. In addition to being the highest-ranking member of the Corps of Cadets, Reveille goes to class with her handler, attends football games and makes appearances at numerous on- and off-campus charitable and promotional events.

Now that she’s officially been named the mascot-in-training, Ramirez said mascot candidate Reveille X will be slowly introduced to her new home – a campus of 70,000-plus students.

“We need to give the candidate time to acclimate, to get used to campus, the number of people she will be exposed to on a daily basis, to living in the dorms and the demands of the schedule that will come with her being Reveille X,” he said.

Ray, last year’s mascot handler, will largely be responsible for working with the candidate during her training. During this time, he said Aggies should be mindful that Reveille IX is still the top dog.

“Feel free to come up and give a warm ‘Howdy’ and introduce yourself to our new mascot-in-training, but just understand that Reveille IX is still our queen through the semester,” Ray said.

When her reign ends after Final Review this spring, Reveille IX will move to the Stevenson Companion Animal Life-Care Center operated by the College of Veterinary Medicine & Biomedical Sciences, where she’ll live out a comfortable retirement. Reveille IX will celebrate her eighth birthday on Nov. 22.

Formerly known as Twix, Reveille IX was donated to Texas A&M at 16 months old in May 2015 by Overland Collies, a kennel based in Chagrin Falls, Ohio. Ramirez said Reveille IX settled into her role as the First Lady of Aggieland “extremely well.”

“My favorite thing is, she comes in my office quite often with the cadets, and every time she comes in she jumps up on my couch,” Ramirez said. “Nobody else gets to sit on that couch but Reveille. That’s her couch and she knows it.”

In May, the mascot candidate will become Texas A&M’s 10th in a long line of Reveilles. What she represents transcends 90 years, Ramirez said, dating back to 1931 when a group of cadets adopted a dog they found alongside Highway 6. Her name was inspired by her habit of barking when the bugler called reveille to wake the cadets each morning.

“Everything’s changed so much recently with COVID-19, and she’s really a sense of stability,” said Reveille IX’s current and final handler, Batie Bishop ’23. “She’s the soul. No matter what happens, Reveille is always going to be here for this university representing the student body.”