Class of ’24 Finding Their Voices In Virtual Fish Camp 2020

Fish Camp 2020
We’re the greatest out of many
Aggieland will hear us roar
Fightin' Class of ’24
AAAAAAAAAAAA!

How do you hold Fish Camp online?

With a Zoom-heavy schedule, a lot of colorful props and backgrounds, Aggie camaraderie and goodwill.

It’s going “better than any of us could have imagined,” said Jennifer O’Neil ’20, Fish Camp’s Director of Public Relations and also Director of Session D, which concluded July 27. With several sessions still to go before Aug. 2, the virtual form of Fish Camp has come to life.

There’s a lot to talk about, and Fish Camp’s 1,156 counselors, 98 chairs and nine directors are ready to listen.

“These incoming freshmen have gone through so much since March, and you could tell how thankful some of them were just to have people their age to talk to, both other freshmen and their camp members — to learn about A&M, but also just to feel like they belonged and had a group of people to cheer each other on as we all enter into another semester of unknowns,” O’Neil said.

Student leaders moved swiftly to convert Fish Camp to an online format and three-day virtual sessions once the switch was announced June 26.

A typical day may run from 10 a.m. to 7:30 p.m., with breaks in between several types of meetings and programs. You might start out the morning in your individual camp’s main Zoom room with 100 to 200 fellow freshmen, then watch a video skit that your counselors made on traditions or on getting along in college. Take a break for lunch, then maybe hold some deeper conversations in a Zoom meeting with your Discussion Group (10 to 15 fish and two counselors).

Programs on A&M traditions could feature the Aggie yell leaders via video, or a re-enactment of Muster in which the 1999 Bonfire’s 12 names are called.

There are even proving to be benefits to the online format.

“On night 2, we do something called ‘Freshman Campfire’ where freshmen get to share with their co-chairs and counselors about their Fish Camp experience,” O’Neil said.

“In normal years, this is done by having freshmen that feel willing to stand up and say something in front of their whole camp. However, this year, we were able to use a service where freshmen got to type out words or sentences they wanted to share with their camp, even if they didn’t wish to speak aloud.

“While there were definitely still freshmen that spoke aloud and showed us we had really made an impact in such a short amount of time, the most powerful ones were the freshmen who in any normal year wouldn’t have spoken at all, but this year got to share things like ‘Thank you for giving me a home,’ or ‘I feel so welcomed here and ready to take on the year with Camp ____ by my side’ without having to feel nervous about speaking aloud.”

Classes won’t start till Aug. 19, but Fish Camp 2020's 3,406 freshmen will already have a support network, with groups both large and small, upperclassmen and fellow fish to turn to.

“For a number of freshmen, this may be the first time they are able to be themselves, or challenged to be themselves,” said Allie Longoria ’09, an Association coordinator of Campus Programs who is a co-namesake with husband Aaron ’08 for Session D’s green Camp Longoria.

“They’re not going to be judged by anybody. It’s a fresh start.” 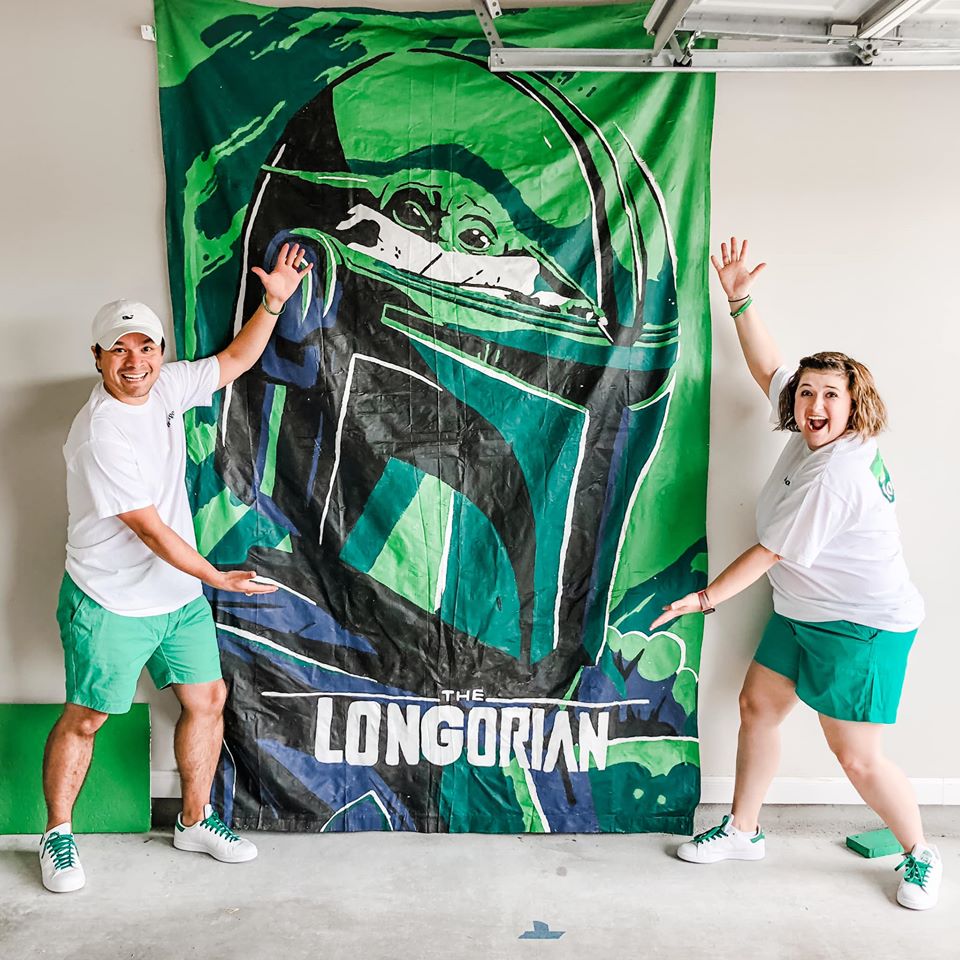 The Longorias with the camp banner made by Camp Longoria's counselors and co-chairs. Learn about nominating someone as a Fish Camp namesake or for other Aggie honors at tx.ag/NominateTAMU.

This year brings challenges for all students, but the Fightin’ Class of ’24 is adapting fast and ready to become Aggies.

Their level of participation is making a real difference in the Fish Camp experience, O’Neil said.

“Normally, I can’t imagine most 18-year-olds would want to sit on a computer talking to people from 10 a.m. into the evening for 2.5 days. But the freshmen that chose to log on and show up have been incredible, and there is a shared connection between how much we want to pour into them and how much they want to connect and buy into that spirit.”

Within each of the 47 camps, counselors normally participate in a variety of get-togethers months before Fish Camp. These events also went largely online: “Our camp has done dinners on Zoom, game nights… That’s how they were able to build such a strong community,” Longoria said. “Our camp did a socially distanced hangout in Lot 100” next to Reed Arena, where counselors pulled up in their cars and trucks.

That energy shows there will be ways to create togetherness once the fall semester gets going, as well.

“Continuity is one of our Fish Camp values,” O’Neil said. “It means that we continue to reach out and support freshmen into them actually starting school, whether that looks like hanging out with them, helping them find their classes, eating meals together, etc. We view our sessions as just the beginning for the impact we can make for the freshmen. Continuity is a very important part of making them feel like they are a part of the family.”

The Association of Former Students has a bold vision to engage 100,000 donors annually for Texas A&M by the end of 2020. To learn more, visit tx.ag/100Kby2020. To help us help more Aggies and continue to support A&M orientation camps, make a gift at tx.ag/Give.