The Aggie Parent and Family Ambassadors, a sponsored student organization at Texas A&M University, announced that Tanya and T.J. Gillespie have been selected as the 2020-2021 Parents of the Year.

The Gillespies were nominated by Andrew Marko ’20, a member of the Corps of Cadets in Company P-2. On Monday, May 11, the Gillespies received a video announcement featuring Marko, fellow members of P-2 and Corps commandant Brig. Gen. Joe E. Ramirez, Jr. '79 notifying them of their selection for the honor and thanking them for their service to the university and the cadets.

Tanya Gillespie said she and her husband were surprised and humbled to learn they had been named Parents of the Year.

“To say we are honored is an understatement,” they said. “There are many great parents who have raised these amazing Aggies before we even meet them. We are so lucky to have them in our life.”

In his nomination, Marko said he met the Gillespies shortly after completing Freshman Orientation Week (FOW) in the Corps. When he and the other freshmen in his outfit were told to contact Tanya Gillespie to set up a dinner, they didn’t realize they were getting so much more.

“What we didn’t know was that we were basically gaining an entirely new set of parents that would love and care for us just as much as our own did,” Marko said. “Freshmen year had its challenges and its rewards, but Tanya and T.J. were there for all of it.”

The Gillespies have a special connection with P-2. Their only son, Taylor Gillespie ’11, was also a member of P-2. Taylor was serving as the company commander when he was tragically killed in January 2011 in a car wreck while returning to campus following winter break. A few years after their son’s death, the couple was inspired to move from Leonard, Texas, to College Station and open Taylor’s Place, a nonprofit providing free accommodations for the families of Aggie students who otherwise could not afford to visit, as well as a home-like environment for students as they face the challenges of transitioning into university life.

Marko described in his nomination the many ways in which the Gillespies embody the core values of Texas A&M, but one in particular stood out above the others.

“The strongest core value they embody is by far selfless service,” Marko said. “Opening up your home and life to basically complete strangers in the pursuit of making all able to spend time with their families or to give them a new family is one of the most unselfish acts I have ever witnessed. I truly have never met anyone more willing to help at any time than the Gillespies.” 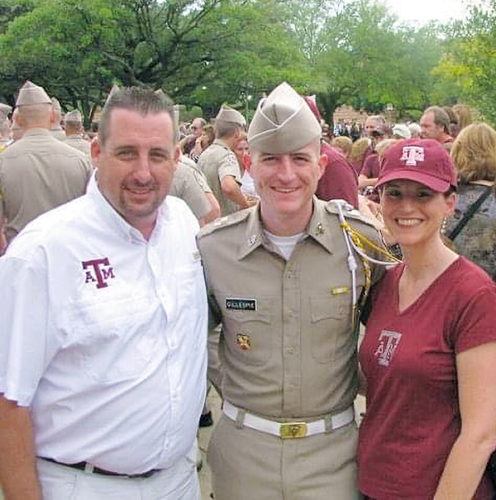 (Courtesy photo) Taylor Gillespie ’11, who was a member of the Corps of Cadets in Company P-2, died in January 2011 in a car wreck while returning to campus after winter break.

The Association of Former Students has a bold vision to engage 100,000 donors annually for Texas A&M by the end of 2020. To learn more, visit tx.ag/100Kby2020. To help us help more Aggies and keep sharing good Aggie news, make a gift at tx.ag/Give.