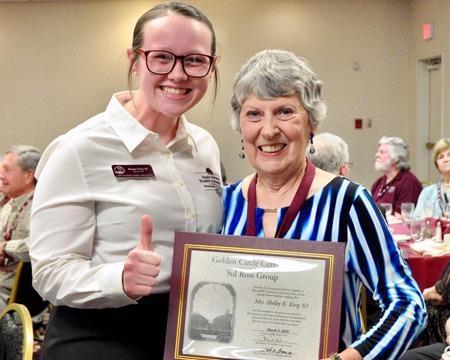 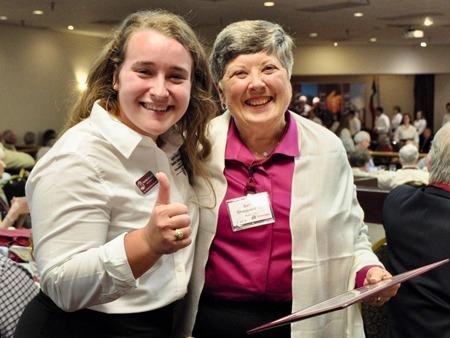 Fifty-five years after becoming some of the first women to graduate from Texas A&M, Holley King ’65 and Sallie Sheppard ’65 are still breaking barriers.

Earlier this month, King (pictured left) and Sheppard (pictured right) became the first two women to be inducted into the Sul Ross Group – a group of Classes that have celebrated 55 years or more since graduation.

The Sul Ross Group reunites annually in College Station, and held their 2020 reunion the first weekend of March. This year, the Class of 1965 was inducted into the group, and along with it, the first two women joined the ranks. We sat down with Sallie Sheppard to hear her thoughts on this milestone.

Growing up around College Station, Sheppard knew she wanted to be an Aggie from a young age. This dream became a possibility when in April 1963, the A&M Board of Directors (now Board of Regents) made the decision to allow women to enroll in classes on a limited basis. By that time Sheppard had already begun college classes at the University of Texas, but “it didn’t take me very long to decide I would move back.”

Despite being one of the first people to break an almost-100-year-old status quo, Sheppard remembers those early days on campus with a smile. While there were some surprises, she was set on her goal. “I found it a fairly easy transition, because now I was finally an Aggie… that’s what I always wanted.”

She credits her experiences at A&M for developing not only a strong academic foundation, but “a confident sense of self” that has continued to serve her. “I think in my career, that’s been very helpful. To not be afraid to stand up, and say what I had to say.”

Sheppard graduated with both bachelor’s and master’s degrees in mathematics from A&M, and went on to earn her doctorate in computer science at the University of Pittsburgh. After finishing her doctoral studies, she learned that Texas A&M was hiring. “It was that same Aggie Spirit that called me to come back and teach,” Sheppard remembers.

She was back where she belonged, this time as a professor – and she’d stay for 22 years. “That sense of family was here as a student, and was still here when I came back as a faculty.”  Sheppard worked as a professor for 12 years, before transitioning into the provost’s office for another decade of service to Aggies. After retiring from A&M, Sheppard and her husband moved to the United Arab Emirates, where they helped open the American University of Sharjah – and made the school color maroon.

The couple now lives in Austin, and were thrilled to return to campus for the Sul Ross Reunion. “It’s fun to go into a room full of maroon,” she said with a laugh. She’s grateful for the ways that the Sul Ross Group provides opportunities to continue to connect with and serve her beloved university. Fifty-five years since her days as a student, Sheppard is confident that “A&M has maintained its core spirit.”

In light of all her accomplishments and trailblazing, Sheppard states that what she is most proud of is “just being an Aggie.” She looks forward to the day when this year’s graduating class will be inducted into the Sul Ross Group decades from now: “I hope they can still say being an Aggie is special, and that they’re happy and proud to be an Aggie.”

The Association of Former Students facilitates Class Reunions like the Sul Ross Group Reunion. For more information about the Sul Ross Group, click here. To see your Class news and learn of upcoming reunions, visit aggienetwork.com/reconnect.