Aggies Across The Globe Are Fighting For Your Coffee

Editor's note: This story originally was published in the September-October issue of Texas Aggie magazine. To make sure you get every issue, visit tx.ag/Magazine.

Texas A&M researchers are changing the lives of coffee farmers and consumers around the world. From plant to roast, Aggies are fighting to create a better market and sustainable future for coffee.

Though it officially began in 2016, the Texas A&M Center for Coffee Research and Education’s roots were planted in coffee nearly 20 years ago, when the Norman Borlaug Institute for International Agriculture staff began working with the United States Agency for International Development to rebuild the agricultural sector in Rwanda after its civil war in the early 1990s. Researchers saw the potential for development in coffee—a crop which had been introduced to the country by Germans a century prior—and maintained a presence through 2012. By then, the Aggies had grounded their focus in coffee and created a vision for the center.

Today, the center fulfills its mission to improve the quality and supply of coffee through research, development and education. Its faculty teaches coffee courses and hosts study abroad trips that allow students to work with farmers and learn about agricultural production. The center also trains local baristas and roasters on bean analysis and cupping, a procedure designed to grade coffee quality.

The center’s work with farmers abroad provides students the opportunity to work on intense long-term projects. Taya Brown ’19 is a doctoral student in horticulture who has spent more than two years in San Pedro Yepocapa, Guatemala. The community’s farmers have faced leaf rust disease, drought and volcanic eruptions in the past five years, making their jobs extremely difficult. After attempts to restore their coffee plants began, Brown started researching the recovery and identifying possible obstacles in the farmers’ way. 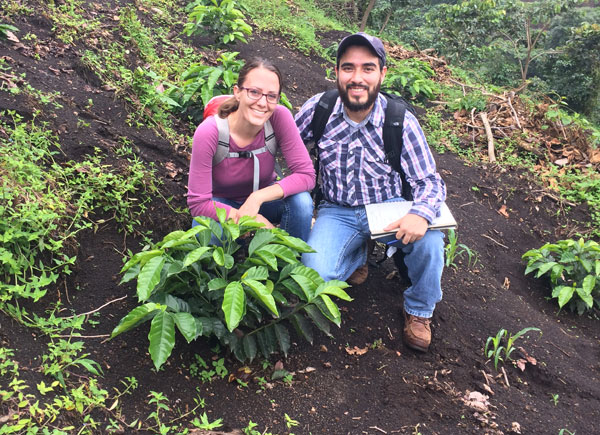 “We want the farmers to stay in business because we like coffee and because it is good for them, for their economy, their country, and it’s good for the United States,” Lombardini said.

Because of her education on campus and immersion in Guatemala, Brown now has the ability to make a lifelong impact on the community of San Pedro Yepocapa. In fact, after the Fuego volcano erupted in 2018, she founded a nonprofit to help the area’s farmers recover. The Del Fuego Project aims to reduce lasting damage to the coffee plants and increase the quality of the remaining beans. Brown sees herself continuing to bring change in the community after graduation.

“I feel very confident that I know what the obstacles are here, and since I work so well with the farmers, I’ve decided to stick around,” Brown said.

More than 3,000 miles away, another Aggie is making a difference through the coffee industry. Dan Streetman ’06 is a green buyer for New York’s Irving Farm, traveling the globe to develop relationships with farmers and purchase their coffee. He’s seen Ethiopia, South Korea, China and Peru, and nurtured friendships with farmers he met years ago.

“Watching their family grow up and evolve because they now have disposable income is very touching,” Streetman said.

While some might say Streetman’s career path is unusual for a history major, he says his liberal arts degree prepared him well for life as a coffee buyer.

“I actually do think that reading about many cultures and studying different religions gave me a lot of skill sets in terms of being able to interact with different people and being able to digest their point of view,” Streetman said.

Campus life outside the classroom influenced Streetman’s career just as much as academics, instilling the core values of Texas A&M into everyday interactions.

“Honesty and being a truthful negotiator are so important to the way I conduct business, and reflect the values and traditions of Texas A&M,” Streetman said.

For more information on the Texas A&M Center for Coffee Research, visit coffee.tamu.edu.

Association donors’ gifts allow Association staff to collect and share Aggie news and much more. Add your support at tx.ag/give.