The small Texas town of Brady is dedicating a statue this summer to a hometown and Aggie hero, James Earl Rudder ’32. 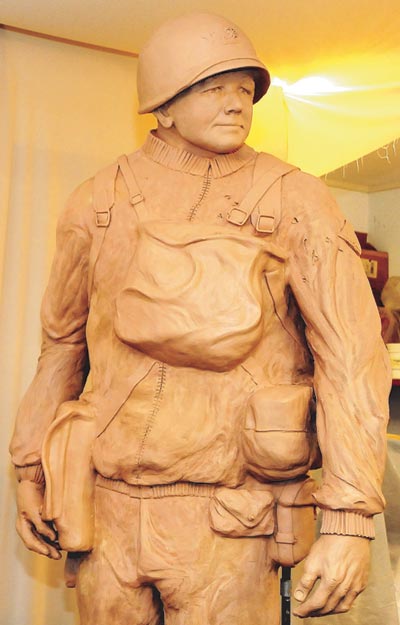 Known among Aggies as a former university and A&M System president and among residents of McCulloch County as a former high school coach and mayor, Rudder served during World War II, rising to the rank of major general after the war, and was commander of the historic Pointe du Hoc assault on D-Day in Normandy.

Anthony "Shady" Groves '68, mayor of Brady, said the effort to memorialize Rudder began a few years ago when Rudder's biographer spoke in town and mentioned a number of monuments exist around the world remembering Rudder's service, but there was not yet one in Rudder's adopted hometown.

"His legacy in Brady centers around the positive things he did as the mayor," Groves said, noting construction of a dam, which created the Brady Creek Reservoir, is one of Rudder's tangible contributions to the town. "A number of small towns flooded [last fall] that were along a river. [He] built a dam that did exactly what it was supposed to do when it was flooding in most other towns in this part of the country; it went from half full to full and we didn't have any problems at all.

Groves cited a few of Rudder's contributions to A&M as its president, including changing participation in the Corps of Cadets to be non-compulsory and admitting women and black students as part of his TAMU legacy. "He started A&M down the road to it being what it is right now."

Groves said this honor has personal significance as he was a student while Rudder was president and would visit Rudder and his wife, Margaret, when Groves's parents came to Aggieland.

"He was very good friend of my folks," he said, adding he had the "deepest respect" for Rudder.

The 8-foot bronze statue of Rudder in his battle fatigues will be dedicated at 2 p.m. on June 6, the 75th anniversary of D-Day, in the downtown Brady square and all interested parties are invited to attend the 30-minute ceremony. Read more from the Brady Standard-Herald here.

Through generous gifts to The Association, we are able to be HERE for Aggies during their days as students and former students, THERE for Aggies as they make their way around the world and EVERYWHERE that the Aggie Network needs us to be. Visit tx.ag/give to make a gift.