Gabriel Chmielewski ’06 in Texas A&M’s Marketing and Communications Department describes below how he captured this image Dec. 6, 2018, to help share with Aggies worldwide the scene as President George H.W. Bush’s funeral train arrived on campus with Ross Volunteers and the Aggie Band among those present to honor the 41st president. 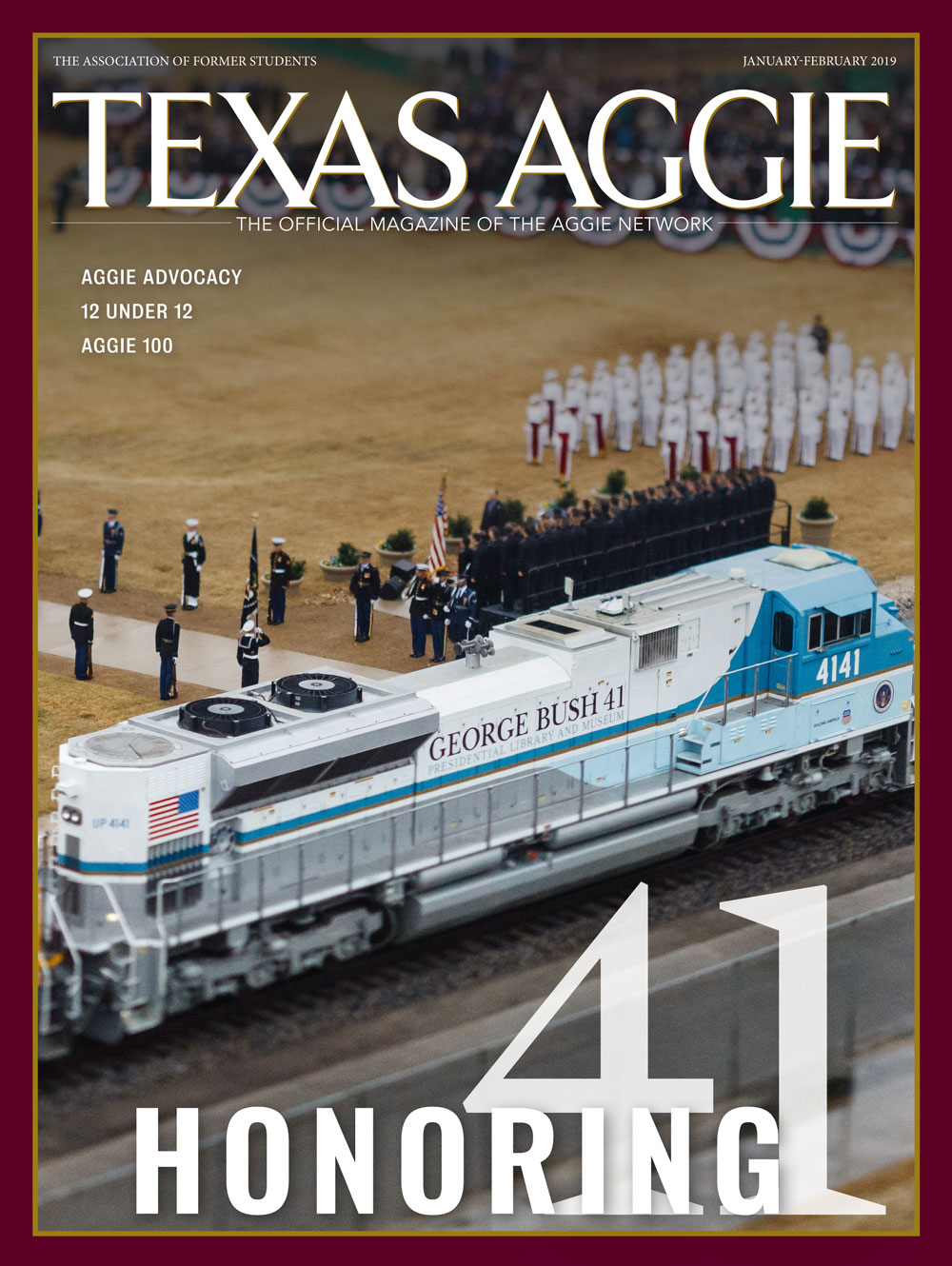 Chmielewski used a tilt-shift lens to create the 'miniaturized' effect in Texas A&M's photo that is featured on the cover of the January-February 2019 Texas Aggie magazine.

Texas A&M senior vice president and chief marketing and communications officer Amy B. Smith said, “The amazing photograph makes it look like a toy train is going to run right off the page or screen and into the room you are in. It brings home the magic of the moment, Americana, and all that Aggies love about President Bush.”

I was the only photographer at my location [the roof of the Texas A&M Hotel and Conference Center, with advance clearance from U.S. Secret Service to be there] and wanted to maximize the amount of coverage I could get for the university.  To do this, I contacted a friend (J.P. Beato III ’96) to borrow his remote camera cords to have the ability to trigger multiple cameras at the same time.

I knew the spot was good, and I wanted to try to create a unique image that would capture the scene in a unique perspective and be timeless, so I asked J.P. if I could borrow his tilt shift lens.

I set three cameras up, knowing that two would be able to cover the scene from two different perspectives, a wider view and a close view.  The third view was the 90mm Canon Tilt Shift lens on my oldest camera body, 5d Mark II — that would be the gamble; if I got it, I got it, and if it was a miss, I was covered by the other two cameras.

My main camera was a 5d4 with a 200-400 Canon lens on a monopod for mobility. This camera has built in wi-fi capabilities that allowed me to send images to my cell phone and to our social media team within minutes of the president’s arrival.

The wider view was a Canon 1DX Mark II with a 24-70.  When the train pulled up, I was triggering the remote by hand so that I could get bursts of images as the train moved through the scene while photographing through the long glass. When the train stopped, I put the remote on my main camera so that every shot I took through my main camera, I was also capturing two other perspectives at the same moment in time.  Thankfully the gamble paid off and I got a photograph that can honor the life of our 41st President.

The short version on the tilt-shift effect…. I think it references the Scheimpflug principle.